WPPS Nagasaki members along with volunteers from across Japan gathered early on the morning of August 9th to organize the world peace prayer event to mark the 70th anniversary of the dropping of the atomic bomb on the city only three days after the Hiroshima event.

Nagasaki is the oldest open-port city of Japan situated on the southernmost island of Kyushu only fifty miles from South Korean. Starting as early as the 16th century Portuguese and Dutch traders frequented the natural harbors and Nagasaki became an international city with many who converted to Catholicism.

The world peace ceremony took place in the Nagasaki Peace Park just a few hundred meters from the epicenter of the blast in the Urakami district which housed the largest known catholic community in Japan.  A great number of churches were destroyed including the Urakami Cathedral which was, at the time, the largest church in all of Asia.  Today the Nagasaki Flame burns brightly on top of a tall monument which marks the epicenter symbolizing the pledge that Nagasaki shall remain the last city on earth to experience nuclear devastation. 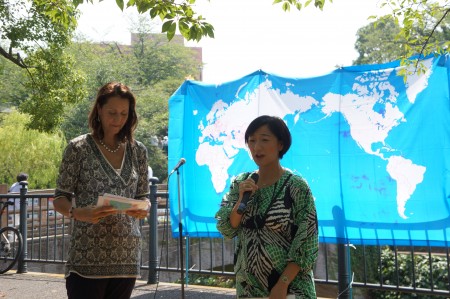 The program began with words of welcome to those who tuned into the webcast live on the internet from around the world.  Rika Saionji, Vice President of WPPS, attended the Nagasaki anniversary event and shared her message of peace and hope with the participants.  She spoke of the importance of keeping peace alive in our hearts and to pass on the legacy of peace to the younger generation.

At 11:02 am, the exact time the bomb was dropped on the city, the sound of the Peace Bell rang for one minute throughout Nagasaki Peace Park.  People throughout Japan also joined in the minute of silence which was broadcast through national media throughout the country.  We all added our prayers, May Peace Prevail On Earth, as we listened to the sound of the Peace Bell and sent our prayers for everlasting peace from Nagasaki out to the world.

The World Peace Flag Ceremony followed the ringing of the Peace Bell.  Visitors in the Peace Park were invited to join the ceremony to carry the flags of each nation as prayers for peace were offered to each region and country on Earth.  People of many nations stepped forward to carry the flags of the world as everyone in unison voiced prayers for peace to prevail on earth. 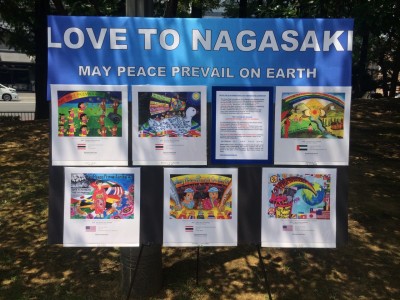 Throughout the day, visitors in the park also stopped to view the Peace Pals Art Exhibition which was on display close to the Flag Ceremony.  Thousands of youth sent in their artwork highlighting the 2015 theme “Love to Hiroshima Love to Nagasaki” in honor of the 70th anniversary.  The winners were announced at an awards ceremony three days earlier in Hiroshima.

The day closed in deep gratitude as we all felt a strong sense of accomplishment and appreciation for sending our prayer of peace, May Peace Prevail On Earth, out to the world on this historic day marking the 70th anniversary

May peace be in Nagasaki
May Peace Prevail On Earth