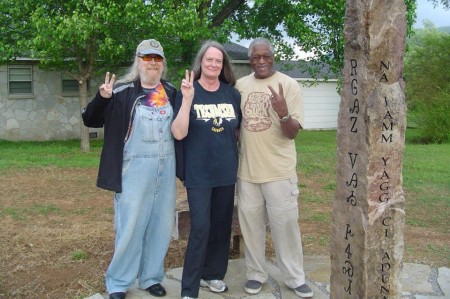 The majority of those attending had not heard of Peace Poles, nor of the World Peace Prayer Society, and much of the meeting was spent teaching about the concept. At the end of the meeting it was voted to move ahead and a second meeting was scheduled to discuss just what sort of Pole, and where it might be located.

At the second meeting it was decided to create a Peace Pole made of the native stone that the county is named for, in the hope that it will share it message of peace  for the next 7 generations. 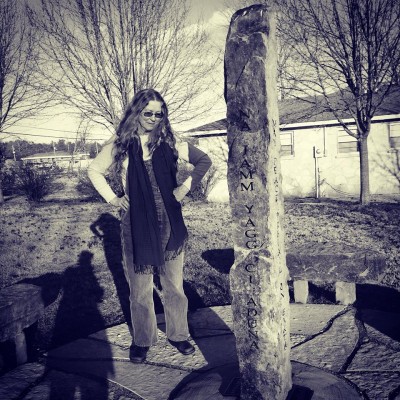 Fundraising was discussed, as well as location. It was decided that it would be most appreciated in a visible and well trafficked public area. Committees were formed to begin fundraising, others to approach the City with the idea, and still others formed for side projects envisioned by various members of the group.

Several successful fundraisers brought enough donations to begin the project, however, after an initial acceptance by the City Council, a faction arose that DO NOT like Peace Poles and the first summer was spent with attempts to gain public ground repeatedly blocked.

However, the Stone County Post #7 of the AmVets organization heard Peace Pole representatives, were taught the concept of Peace Poles, and voted to welcome the Mountain View Arkansas Peace Pole on the site of their post at 1112 W Main St, in Mountain View, AR. 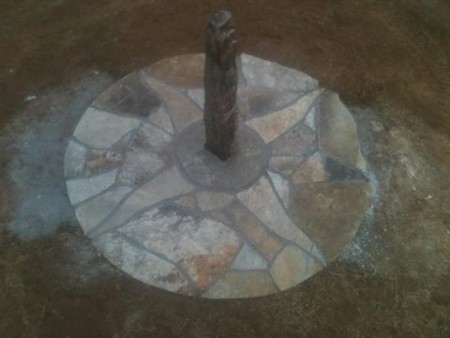 A third meeting was held after one of the fundraising events and it was decided to make the languages represent the history of Stone County. Thus the languages chosen for the phrase ” May Peace Prevail On Earth ” would be Cherokee for the original inhabitants, the First Nations. Cherokee was specifically chosen because it is the only First Nations language with it’s own alphabet, as well to honor those who walked the roads of the Trail of Tears, which is very near this part of Arkansas.

Irish-Gaelic was chosen to represent the Western settlers. Mountain View is called ‘ The Folk Music Capitol of the World’ and is famous for it’s long history and dedication to preserving the music brought to this country by those early settlers.

Wolof, the native language of Senegal was chosen to represent the often under-represented efforts of the African people, many of whom were brought from Senegal as slaves and whose descendants helped work the barges, build the roads, and lay the railroads, and whose efforts allowed the settling and growth of the area.

The fourth language is modern English for the people of today and the 7 Generations To Come.

It has been a long road from that January over 2 years ago, with a great deal of support as well as a great deal of resistance. A small core of the original group have kept the project going and have chosen to underwrite the remaining expenses, therefore…

The Mountain View Arkansas Peace Pole has finally been built, set, and is close to completion! There remains some mosaic work to be done on the concrete at the base of the Pole, and then it will be ready to be Dedicated, and to give over to the care of the AmVets. 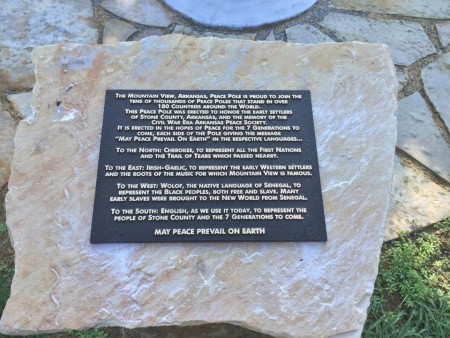 The Dedication date has yet to be determined. It has always been the hope that it would be dedicated on the International Day of Peace on September 21st. If the mosaic is laid in time, there will be a dedication this year, but things move slowly in the South, and it may be that Dedication will be put off until that date in 2016.