The Charter of the United Nations declares its primary goal "to save succeeding generations from the scourge of war," as well as "to practice tolerance and live together in peace with one another." The message "May Peace Prevail On Earth" articulates these aspirations from the heart, while the unique World Peace Flag Ceremony with the flags of all nations united in harmony is a perfect expression of their achievement.

May Peace Prevail On Earth International has been affiliated with the United Nations Department of Public Information as a Non-Governmental Organization (NGO) since 1990. The goal of the WPPS at the United Nations is to bring the message "May Peace Prevail on Earth" into the workings of the UN - including governments, agencies, departments, NGOs and events. This neutral, universal message can serve as a bridge among people from all parts of the world.

A popular sticker supporting the United Nations with the message for world peace was approved for distribution in 1995, during the UN 50th anniversary celebrations. 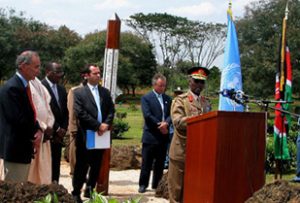 The Peace Pole is a well-known symbol of peace at the United Nations, as it is across the globe.

A Peace Pole planted on the grounds of the UN Office at Nairobi in 1999 remains the site of various commemorative occasions, including the International Day of Peace. 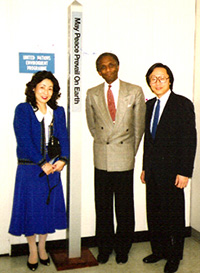 A Peace Pole presented to the UN Department of Public Information in 2004 was kept for an unprecedented 18 months in the UN lobby, where visitors wrote messages for peace and placed them inside the pole. There is a Peace Pole outside the New York office of the UN Environment Programme, and a similar one was gifted to UNESCO New York.

The inspiring World Peace Flag Ceremony uniquely honors each UN Member State by calling its name, raising its national flag and offering the intention for peace.

The International Day of Peace

May Peace Prevail On Earth International actively encourages all people worldwide to observe the UN International Day of Peace annually on 21 September.  MPPOEI has worked in partnership with the UN Department of Public Information since 1997 to organize an annual event at UN headquarters for up to 800 students that includes remarks by the Secretary-General and celebrity Messengers of Peace, a video link to several UN Peacekeeping missions in nations with conflicts, music, youth presentations, and, as a grand finale, a World Peace Flag Ceremony.

The Gandhi-King Season for Nonviolence (30 January - 4 April)
An event for New York area students honors the Season for Nonviolence each year, organized by a coalition of NGOs headed by the Temple of Understanding. Students learn about the UN and the timeless work of Mahatma Gandhi and Martin Luther King, Jr. to achieve their goals through nonviolent means. This event closes with a joyful World Peace Flag Ceremony.

Flag Ceremonies have been held for other occasions, such as the annual Youth Assembly at the UN, the annual Wesak celebration hosted by the UN staff's Society for Enlightenment and Transformation, side events for conferences, and religious or spiritual observances in the Chapel at the Church Center for the United Nations.

Building a Culture of Peace 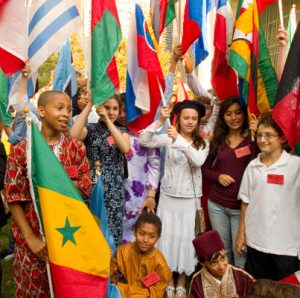 In addition to building relationships with national Missions to the United Nations, May Peace Prevail On Earth International works in partnership with the staff of various UN departments, agencies, and other bodies, including: UN Dept. of Public Information - Outreach Division and Peace & Security Divisions, both partners for the International Day of Peace.

UN Environment Programme - Interfaith Partnership for the Environment
UNESCO
UNICEF
UN Programme on Youth
Alliance of Civilizations
Tripartite Forum on Interfaith Cooperation for Peace - comprised of representatives of Missions, UN agencies and other participants, and NGOs