For those of us who pray for world peace the anniversary of the atomic bomb is a day of remembrance and respect.  Members of WPPS in Hiroshima have been organizing an annual event in the Hiroshima Memorial Peace Park, marking this day, August 6th, for the past 23 years and with the 70th anniversary this year a special extended program and live webcast was organized with the WPPS headquarters in New York. 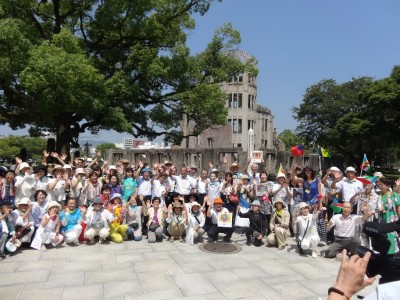 The webcast commenced at 8:00 am in front of the atomic bomb dome, one of the only surviving buildings after the attack which remains as a symbol of hope and renewal.  Fumi Johns Stewart, executive director of WPPS welcomed the webcast audience and invited viewers to join in a minute of silence at 8:15 for the ringing of the Peace Bell which marks the exact time the atomic bomb fell on the city.

Across the Motoyasu River on the west side of the Peace Park, an event took place dedicated to the atomic bomb victims and world peace.  The official peace program hosted by the City of Hiroshima began at 8:00am and was attended by Prime Minister Abe along with other Japanese officials.  A record breaking number of participants from over 100 countries witnessed the official memorial ceremony this year to mark the 70th anniversary.  Among honored guests were the families of the Hibakusha, atomic bomb survivors and their relatives. After the ringing of the Peace Bell, a thousand doves were released at the close of the program. 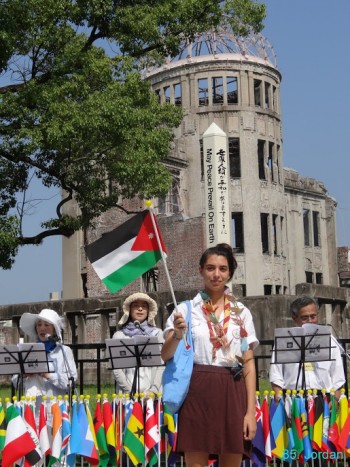 The World Peace Prayer Society continued the webcast program with peace builders from seven locations around the world who joined in a web conference. Representatives from Scotland, Israel, Egypt, US, Uruguay, Australia and Canada spoke and shared their visions of a peaceful world while reflecting on this significant anniversary.

The highlight of the event was the World Peace Flag Ceremony which invited visitors and guests in the park to carry the flags of every nation to send peace to all regions on Earth.  A special guest, Mr. Stefan Schostok, the Lord Mayor of Hanover, shared his message of peace with us and spoke about a similar program the city of Hanover is hosting for the 70th anniversary. 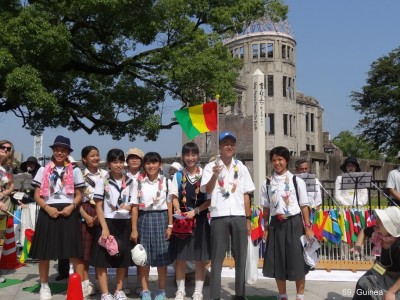 Local as well as international visitors in the park volunteered to carry flags during the World Peace Flag Ceremony to send peace to each of the 193 countries on earth.   It was moving to see the large number of youth who had traveled from around the world who stepped up to carry the flags of the world. Many of them spoke to express their prayers and commitment in building a culture of peace.

To close the program, the winners of the Peace Pals Art Awards Ceremony were announced in the four age group categories.  In remembrance of the 70th anniversary, the theme of the 18th annual Peace Pals Art Awards and Exhibition program was chosen to be “Love to Hiroshima – Love to Nagasaki.” Thousands of children participated from every region on Earth to send their artwork expressing their prayers to Hiroshima and Nagasaki along with their wishes for a hopeful future. 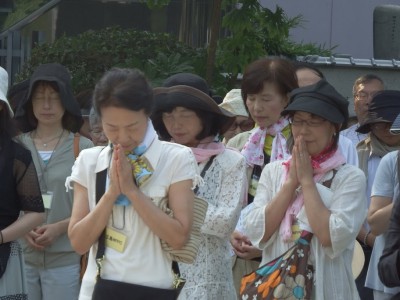 Over a hundred WPPS volunteers from around Japan traveled to Hiroshima to mark this anniversary day.  With one heart we joined in the spirit of peace to express our message of peace on the 70th anniversary with the people of the world.

May Peace be in Hiroshima
May Peace Prevail On Earth