The artist Marco Paulo builds together with refugees a “Bridge of Humanity” on the Blomberg Mountain.  A twelve language Peace Pole was part of the art wall path project  entitled, “Change of Mind.” 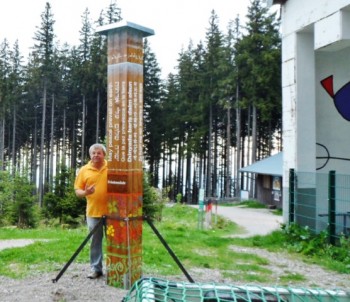 A bridge normally spans over water or valleys.  But a bridge on a mountain?

Artist, Marco Paulo has called his project “The Bridge of Humanity” which opened on July 5th, in addition to the mountain rescue hut to be part of the art trail, entitled,  “Change of Heart.”

For thirty years, Marco Paulo has expressed issues of war and Environmental Degradation  in his paintings, sculptures, installations, performance art, land art and in his books.

February-2015, the “Peace Pole” was also exhibited at the “TölzKunst 1” on the banks of the Isar, in the St. Michael’s Church in Munich, Germany.

Paulo is convinced that art can make a contribution to understanding and peaceful coexistence.  Paulo is a craftsman with four championship titles as a plasterer, painter, and interior decorator.