The Won Buddhism International UN and Interfaith office organized a beautiful workshop on March 10th on “The Spiritual Empowerment of Women & Girls” as a side event to the 58th annual Commission on the Status of Women at the United Nations. The World Peace Prayer Society was a co-sponsor, along with the Temple of Understanding, United Religions Initiative and the International Federation of Women in Legal Careers.

There were presentations by:

·      Consolée Nishimwe, author of “Tested to the Limit: A Genocide Survivor’s Story of Pain, Resilience and Hope”

The panel was tremendously inspiring, starting with two beloved spiritual leaders. Ven. Chung Ohun Lee spoke of the importance of educating girls, which Amma Sri Karunamayi affirmed with a slide show of her generous work in India providing education, housing and clean water to so many in need. Sande Hart outlined the exciting, new paradigm quest for “Survival of the Kindest” across America and the world. Consolée Nishimwe told of the tremendous faith that brought her through the darkest of night, moving everyone to tears. 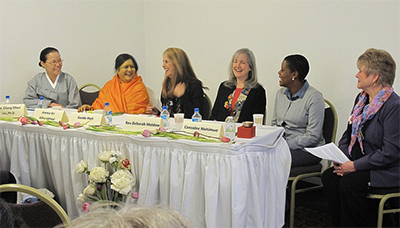 Deborah Moldow thanked everyone present for their personal contribution to the culture of peace that is emerging, empowering women and girls across the globe, as well as encouraging men to recognize the feminine side of their nature. She led a World Peace Flag Ceremony where everyone raised laminated flags representing every country of the world. Countries needing special prayers were acknowledged, and then all the flags were raised at once, and all joined in praying, “May Peace Prevail on Earth!” Monica Willard closed the program by suggesting hugs all around. 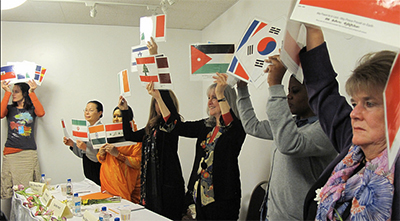 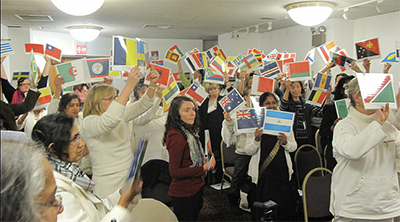