Once again, students from the UN International School raised the flags of all nations as the Secretary-General rang the UN Peace Bell in the Rose Garden. A trusted UN security guard actually came out to First Avenue to help us to hurry the flags past security!

A Peace Pole was at the front of the Conference Room in the temporary building used during the five-year renovation. The WPPS Peace Bell was again used for the “practice” 12-noon Minute of Silence with the wife of the Secretary-General, Mrs. Ban Soon-taek. She stayed through the annual World Peace Flag Ceremony, participating the whole time and again taking the UN flag at the end. 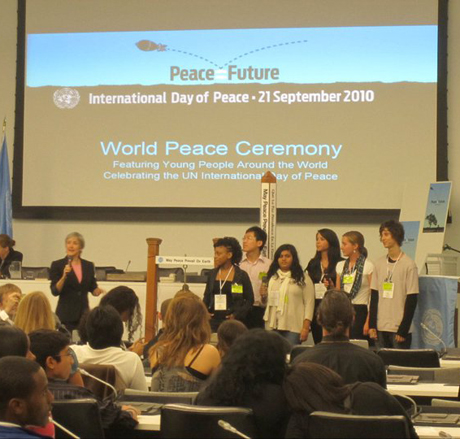 Deborah Moldow, UN Representative for The World Peace Prayer Society let the Flag Ceremony. During the Flag Ceremony, youth from Canada’s “Circle of Peace” group led a MPPOE chant, while students raised the flags of every nation in a circle around the room. Everyone paid close attention, following the country names on the PowerPoint projected on the screen. The students continued to wave the flags during the finale performance of “We Are the World” by a group of Japanese students, for a beautiful close to the event. The WPPS staff and volunteers did a terrific job with the ceremony, and the UN Department of Public Information was very happy with the way it went.

This event will be part of the UN video achieve and available at: http://www.un.org/webcast/2010.html 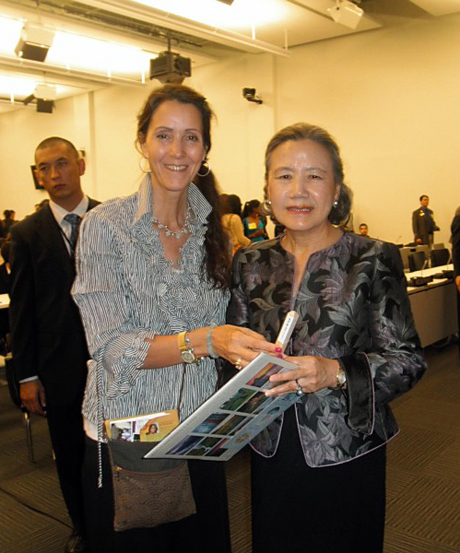