Representatives of various faith traditions, visionaries, musicians and artists from around the world came to Ethiopia, “Land of Origins”, to celebrate World Interfaith Harmony Week from 31 January until 7 February 2018.

The week began with a Unity Earth sponsored U-Day Festival – Convergence of Fire.  The two day spiritual retreat and opening ceremony of the U-Day Festival was held in sacred Lalibela where a ceremony to light the Torch of Peace, the Torch of Unity and the Torch of Compassion was presented in the presence of global spiritual and religious leaders, change-makers and musicians.

The highlight interfaith event took place on February 2nd in the Plenary Hall of the African Union Commission building under the theme, “Interfaith Cooperation to Promote a Culture of Peace, Harmony and Human Dignity.”  It was a most auspicious location as members of the African Union Peace and Security Council meet here on a regular basis to negotiate resolutions and programmes which affect the lives of millions of people on the African continent. 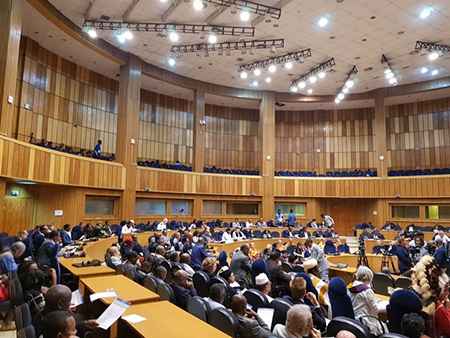 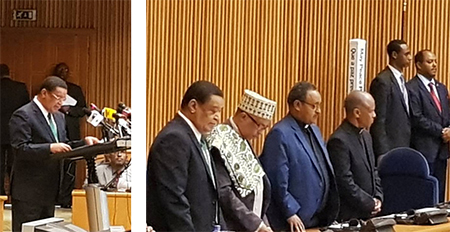 President Mulatu Teshome of Ethiopia delivers opening remarks and joins the moment of prayer to commence the program.

Prayers from various faith traditions were offered to open the program followed by the message “Treat others the way you want to be treated” coined in the Golden Rule read from different holy books by representatives from the Christian Ethiopian Orthodox Church, Islam, Judaism, Buddhism, Hinduism, Sikh, Bahaï and from the indigenous native American, aboriginal and maori traditions. 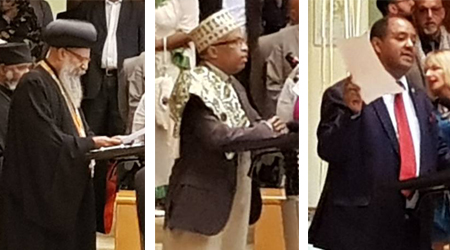 Inspirational messages from dignitaries were delivered for this auspicious occasion including a message from Mr. Hiroo Saionji, President of The Goi Peace Foundation and The World Peace Prayer Society which was read by Mr. Patrick U. Petit, representative of The Goi Peace Foundation.  In his message, Mr. Saionji stressed that the ‘divine spark’ inherent in each human being and in all living things is our common source of existence. He called upon and reminded participants to help igniting the divine spark in humanity’s consciousness in order for lasting peace and harmony to prevail on Earth. 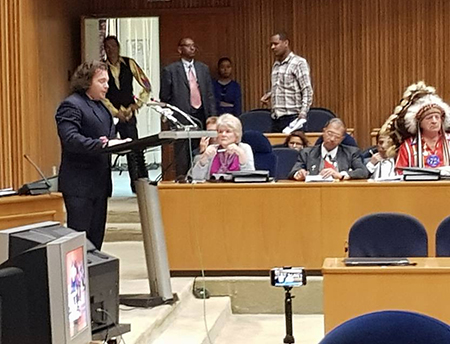 The World Peace Flag Ceremony was presented by Fumi Johns, Executive Director of WPPS as a grand finale of this auspicious event at the African Union Commission Headquarters.  Participants joined in prayer by offering their hearts and minds for peace to prevail in each single country while young Ethiopians carried with pride and dignity the respective flags of all the nearly 200 countries of the world. An atmosphere of oneness with diversity filled the room. Participants were ecstatic and deeply moved by the energy of oneness as the Flag Ceremony came to a dramatic close in the presence of all the member flags of the African Union. 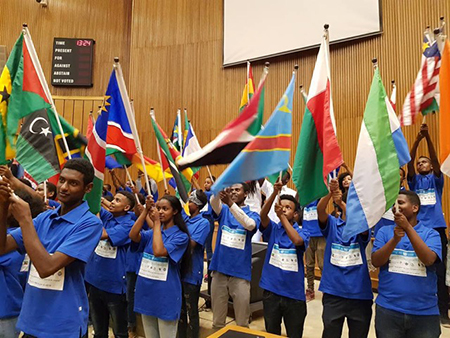 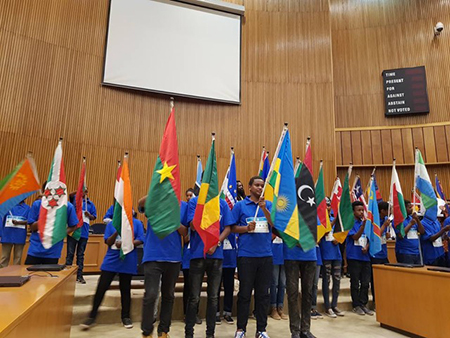 Once the Ceremony came to a close and while the room was filled with a vibrating spirit of joyful unity, a Peace Pole was presented to the people of Ethiopia and to the African Union Commission followed by a series of desktop Peace Poles presented to religious and cultural dignitaries present at this commemorative event. 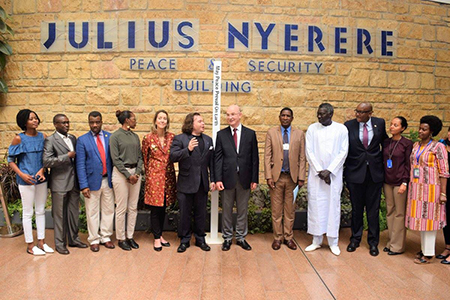 The World Interfaith Harmony Week event at the African Union Commission Headquarters was facilitated and orchestrated by H.E. Ambassador Mussie Hailu, WPPS Peace Representative in Ethiopia and Representative of the United Religious Initiative to Africa and to the African Union Commission, who worked tirelessly to make this special event happen, and to whom we would like to cordially express our deepest gratitude and respect.

May peace be in Ethiopia
May peace prevail on earth