When a Peace Pole was presented to Mayor César Souza, Junior of Florianópolis, Brazil, during the World Peace Forum in September of 2016, a powerful chain of events were set in motion.  In attendance were mayoral representatives from the province of Corrientes, Argentina who were all inspired by the idea of planting Peace Poles and as a result, the first seeds of the Inter-American Highway of Peace Poles were planted. 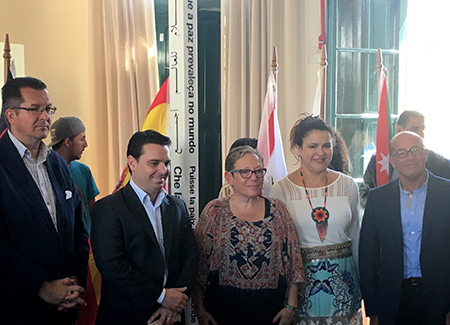 A group of individuals and organizations met soon after the World Peace Forum to discuss how to join the global Peace Pole network and bring the message of peace to their communities.  The collaborators behind the vision of the Highway of Peace Poles included Dominicus Rhodes, Director of the World Peace Forum along with Egido Machrey of Instituto Dulce Magalhaes of Brazil and Martha Repetto of Corrientes Province.  Together they created a vision to create the Camino Interamericano de Paz by connecting Florianópolis all the way to New York with a Highway of Peace Poles.  The Camino would also honor Dulce Magalhaes, who was a great inspiration behind the Camino and who passed away shortly after the World Peace Forum.

After months of planning, the mayoral representatives from the 6 towns in Corrientes Province who witnessed the peace pole ceremony in Florianópolis ignited the interest of their mayors who all agreed to plant Peace Poles to kick off the “highway” in Argentina.   Fumi Johns Stewart and Jules Lamore from WPPS were invited to celebrate the dedications of the first Peace Poles to mark the inauguration of the Camino Interamericano de Paz – Highway of Peace Poles. 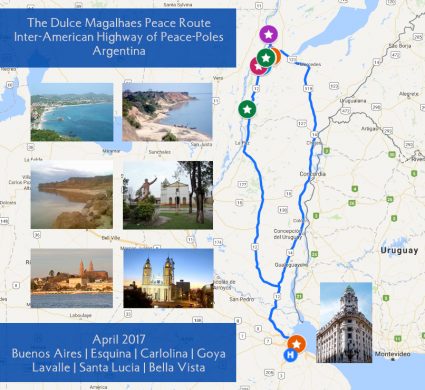 At each Peace Pole dedication, the Mayors and officials of each of the 6 towns along with the community welcomed Fumi and Jules along with Dominicus, Egidio and Martha who collaborated in creating the initial vision for the Camino.  During the dedication ceremonies Mayors, WPPS and collaborators spoke about the significance of the Highway of Peace Poles and shared our visions for a peaceful world. 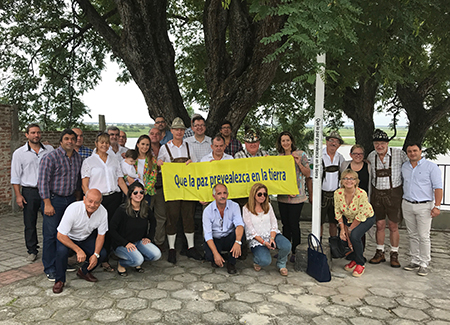 Later that afternoon, Mayor Gerardo Bassi of Goya kindly welcomed the peace group to his office for a warm welcome before gathering outside at the unveiling of the Peace Pole in the heart of town.  Despite the wind and rain, the well-wishers exchanged words of gratitude and made a commitment to keep the spirit of peace ignited within their community. 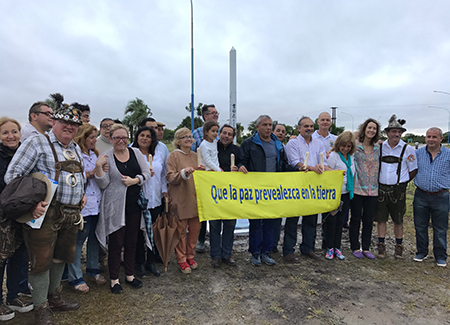 The last Peace Pole of the day was dedicated at the town park in Carolina.  The ceremony started with the town Reverend blessing the Peace Pole followed by words of welcome by Mayor Marcelo Nocetti.  After a Poem was recited by a local student, a ribbon was cut to officially unveil the Peace Pole. 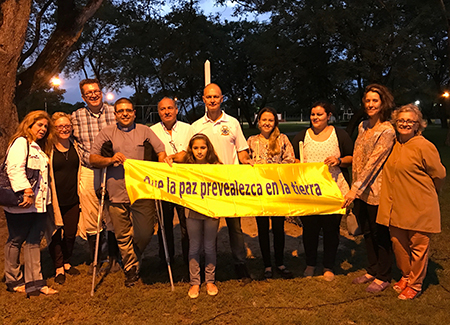 The following morning on April 9th, Mayor Maria Gladys Cueva of Lavalle invited us to city hall where an official gathering took place with the local community.  We all spoke about the importance of the Camino and shared in the spirit of goodwill and peace.  After dedicating the Peace Pole outdoors, we gathered for lunch where local youth performed traditional dancing and music. 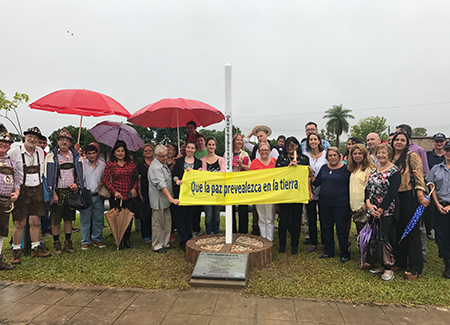 In the afternoon, we met with Mayor Jose Carlos Sananez of Santa Lucia who welcomed us to his office with a cup of warm yerba matte tea.  We then met the community in the city hall where congratulatory speeches were shared, followed by a performance by local dancers and a reading of a peace poem by a local school girl.  The Peace Pole was dedicated soon after along a newly constructed road which was named Camino de Paz. 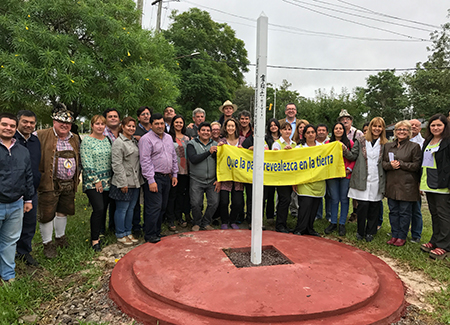 On April 10th, the community of Bella Vista gathered in the evening to greet the peace group at the city assembly hall.  Mayor Walter Chavez of Bella Vista gave a moving speech followed by other remarks in celebration of the Highway of Peace Poles.  The next morning on April 11th, we all gathered again to dedicate the Peace Pole in a prominent location by the River Parana. 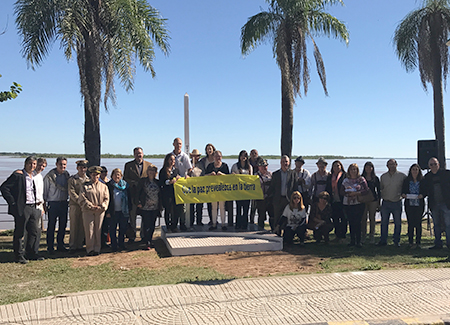 On April 12th, the last stop of the Peace Pole journey took place in Buenos Aires at the Honorable Congreso de la Nación Argentina (Honorable Congress of the Argentinian Nation) where we met with Cornelia Schmidt-Liermann who congratulated us on the inauguration of the Inter-American Highway of Peace Poles.  At a future date, she will be instrumental in dedicating the 7th Peace Pole to include the city of Buenos Aires as a stop along the Highway of Peace Poles. 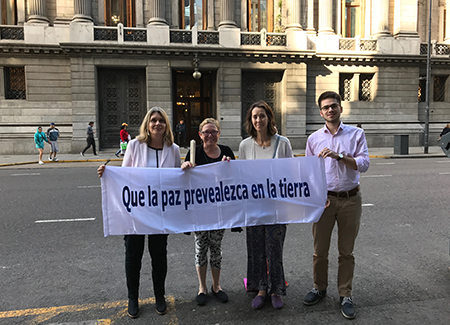 Starting with the first Peace Pole in Florianópolis, Brazil followed by the dedications in Corrientes Province, the Highway of Peace Poles inspired the hearts of many people and will continue to do so all the way to New York.

It is a long-term project with a big vision but the momentum has started and the vision is clear.