When Mr. & Mrs. Thapa found out I would be visiting Nepal, they asked me to bring a Peace Pole for Mr. Smeet Lama and a second, identical, Peace Pole as well. So, with the help of Professor Emeritus Dr. Isao Minowa, Mr. Parbat Thapa & Mrs. Deepa Thapa, and their friend Mr. Smeet Lama, I prepared two large Peace Poles as gifts. 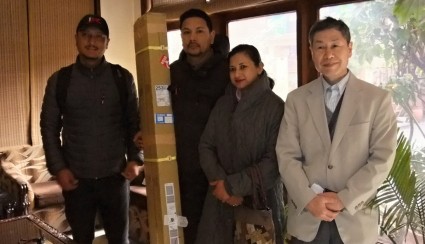 On our second day in Kathmandu, Mr. & Mrs. Thapa and Mr. Smeet Lama came to our hotel to receive the Peace Poles. 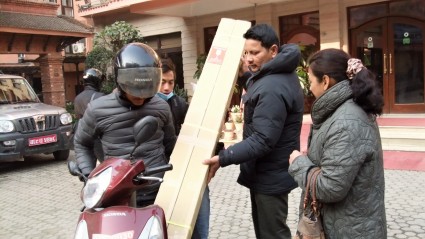 It was my first meeting with Mr. Smeet Lama. But I had heard that he wanted very eagerly to have it, because he had seen a Peace Pole with the universal message “May Peace Prevail on Earth” standing in the garden of Mr. & Mrs. Thapas’ house and he wanted to plant one in his own community.

Mr. & Mrs. Thapa are good friends of Mr. Tomoyoshi Kurata, a Japanese teacher & Mrs. Masae Hatakeyama (a supporting member of Goi Peace Foundation).  And Mrs. Deepa Thapa has participated SOPP on May in Fuji Sanctuary for a few times. 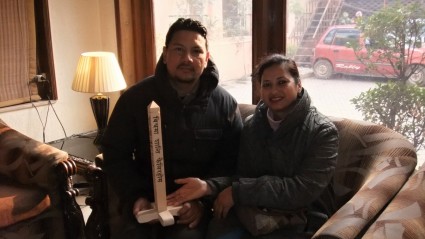 Mr. & Mrs. Thapas and the small Peace Pole made for them 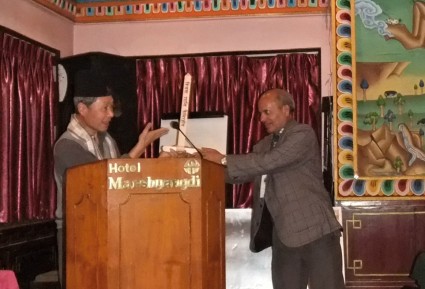 So, I gifted one to the Chairperson of the association along with 100 origami peace dolls with stickers that read Paco disvastiĝu sur la tero, which is Esperanto translation for May Peace Prevail on Earth. The peace dolls were prepared by Ms.Chikage Nakanami of the Goi Peace foundation.

About a week after my return to Japan, I received an e-mail with beautiful photographs of the Peace Pole planting ceremony of Mr. Smeet Lama that occurred on March 12, 2016. 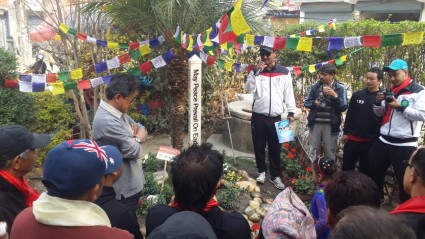 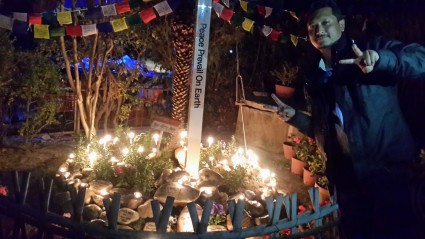 Message from Smeet Lama
“Hello, my name is Smeet Lama. About the Peace Pole…we planted it in our small community park here in Lalitpur, Kathmandu, Nepal. I somehow got a chance to meet Mr. Mitsuru Ooba who is supporting member of this GOI PEACE FOUNDATION. He gave me this Peace Pole …which I planted in our park. With almost 300 people we made this programme a big success. I had read about this peace movement … and I’m much happy to be a small part of it.”

I was very pleased that he organized such a big ceremony with 300 guests of his society and I was so impressed with the numerous stones with beautiful words on them under the Peace Pole. Seeing these photographs, there was no doubt that he strongly embraced the peace activity of the Peace Pole planting. 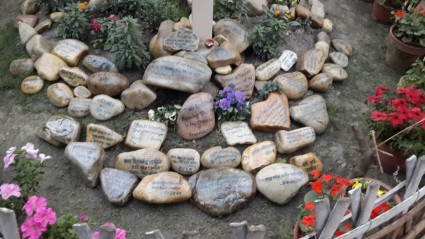 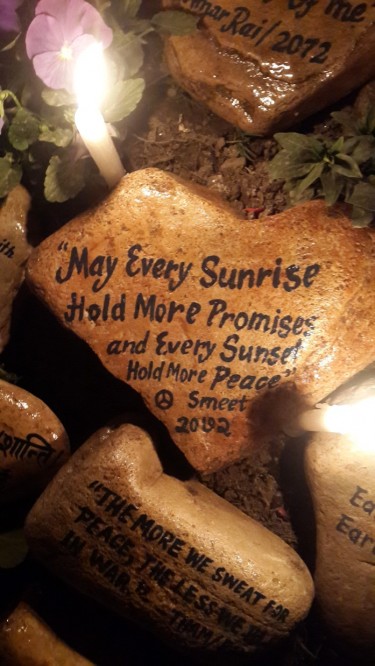 I enjoyed Nepal tour with 15 of Esperantists by mini-bus and drew many quick portraits with peace messages and gifted them to people I met along the way. I visited places of earthquake damage such as a Hindu temple and a private house in the city, and a beautiful place of Himalaya ranges. 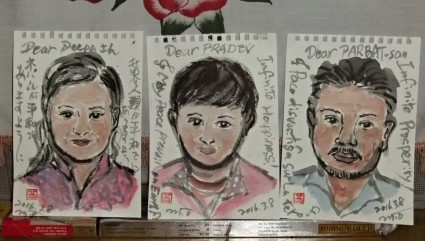