Something new now sprouts amid the green space behind the Ursuline Sisters’ Motherhouse: a Peace Pole, one of tens of thousands located in 180 countries proclaiming, “May peace prevail on Earth.” These words are written in different languages on the pole that was blessed by sisters and associates on July 27 during Community Days. 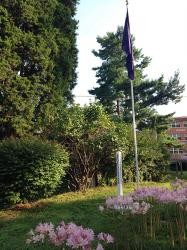 “This little plot shows that we are in solidarity with people throughout the world,” commented Sister Janet Marie Peterworth, president of the Ursuline Sisters of Louisville. “When we walk by and see the flag and the peace pole, they raise our consciousness and the call to be peace makers.”

Sister Janet Marie further explained, “The languages chosen for the pole, other than English, are Spanish, to connect us with our mission in Peru, French, to remind us that our Ursuline community is part of the Congregation of Paris, and German, to recognize our original mother foundation in Straubing Bavaria.”

The Peace Pole Project is a mission of The World Peace Prayer Society, which encourages public awareness of peace by building an international peace network among individuals and organizations in all fields, including education, science, culture and the arts to stimulate the global trend toward a culture of peace.

Peace Poles are planted or displayed to “plant” a positive thought in the minds and consciousness of the global community. Some noteworthy sites with Peace Poles include: the Pyramids of El Giza, Egypt, the Magnetic North Pole in Canada, the Allenby Bridge between Israel and Jordan, Mt. Fuji, Japan and at the United Nations in New York.

Erected and blessed in July 2015, the Peace Pole and flag stand on the campus of the Ursuline Sisters of Louisville, KY.

WhatsApp
Share
Email
Tweet
Pin
Share
Posted in The Peace Pole Project
← Be The Peace Global Teleconference on the International Day of Peace in ISRAEL-JAPAN-SCOTLAND-URUGUAY-USAPeace Pole Sighting- in JAPAN, PERU and the PHILIPPINES →