I am sharing photographs taken at the Syria”BENEFIZ” Day ( Charity Day) in my neighboring community. The purpose was to raise funds to purchase dialysis machines which are so desperately needed in the large refugee camps in the neighboring countries of Syria.

Lebanon for example has 1 million Syrian refugees now, but the chronically ill refugees suffer the most, because there is not enough medicine to administer.

The 400 attendees including the German volunteers in our neighboring community and the Syrian refugees made miracles happen yesterday! 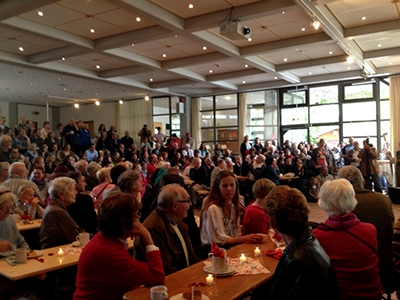 Stickers which bear the message, May Peace Prevail On Earth (MPPOE) in  Arabic were offered by supporters to raise funds for this worthy cause. 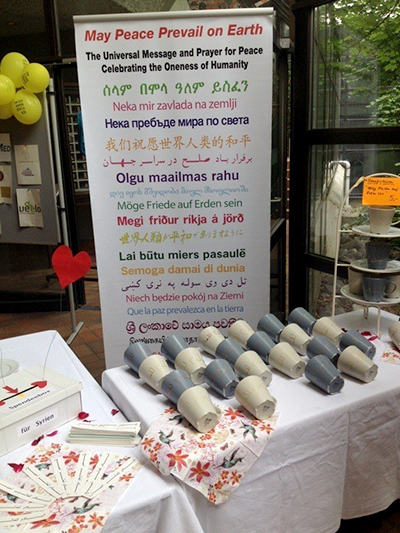 The drinking cups which you see in the photograph had the peace message (MPPOE) written in Arabic and were also sold to raise funds.

10,000 EUROS in donations were collected. HOORAY!

I am so happy for these wonderful Syrians whom I met under very sad circumstances; they enriched the lives of everyone who attended with their “Oriental Love for Life.”

In another photograph you see us dancing. 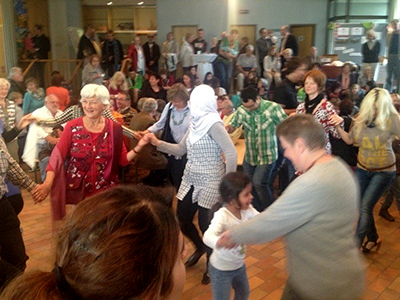 The stories about the journey of the Syrian refugees, waiting for the boats, and then to finally arrive in Sicily brought tears to everyone who stood by to listen, ultimately they kept their faith and continued to pray, each day,  during the 9-day journey on rough sea and now they are here, safe in Germany for at least 3 years … that is the time allowance for their stay, at least initially.