September 21st marked the United Nations’ 30th Anniversary of the International Day of Peace, designated by resolution in 1982 for the purpose of highlighting efforts to end conflict, cease fire and promote peace.

The Boys and Girls Scouts of America (community troops from the Hudson Valley) arrived in uniform and participated as flag bearers in both the World Peace Flag Ceremony (WPFC) and The United States of America Flag Ceremony, along with the Peace Pals youth group from Connecticut and children and families from the community.

Each year, the Peace gathering is held under the canopy of a century-old Walnut Grove.

The Program begins by asking the attendees to join in a prayer ceremony for the indigenous peoples of The United States of America. This year the Native American Prayer Ceremony was presented by Grandmother Silver Star and Grandmother Echata Wilisa Dinane. Music accompaniment was provided by Roland Moussa and Mark Pukmel.

A beautifully orchestrated World Peace Flag Ceremony (WPFC) was presented by Fumi Johns Stewart, Executive Director of The World Peace Prayer Society.
The September 11th Memorial Peace Pole was placed in the center of the Ceremonial field as the focal point for the WPFC. The Ceremony was presented respectfully by region. In totality, flag bearers carried national flags representing 196 countries of the world, as they proudly proclaimed “May Peace Prevail On Earth” for the people and land in each country. 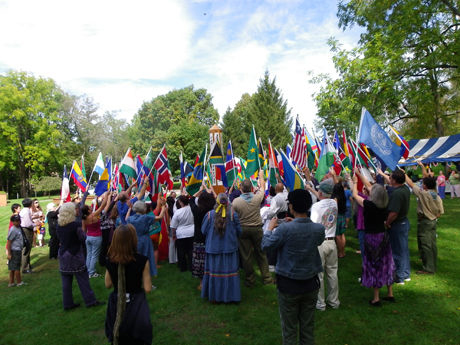 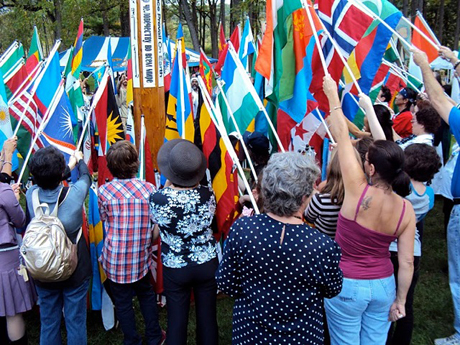 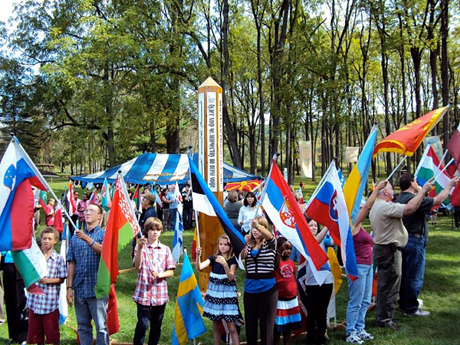 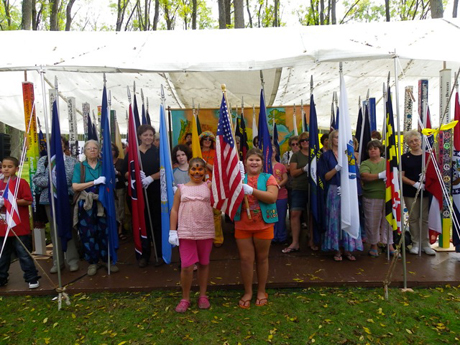 HIGHLIGHTING THE EVENT:
This year marked the 14th Annual Peace Pals International Art and Award Ceremony. Bahrain, Botswana, Ethiopia and Uganda were added to the list of nations that were represented this year. The artwork was juried by a panel of international judges for the final selection. Jules Lamore, Peace Pals Coordinator announced the winners in each of the 4 categories. All artwork submissions were beautifully displayed on panels for all to enjoy. To view the winning entries, please visit: www.peacepals.org. 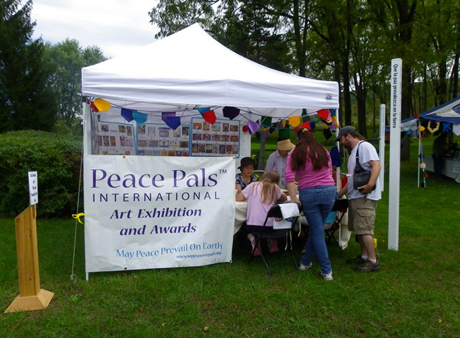 The Peace Pole Art Youth Project: Jim Dugan, WPPS Sanctuary Manager and a coordinator of The Peace Pole Project, created a Peace Pole kit that included a blank (8) foot Peace Pole, paint and 36 language translations of the message “May Peace Prevail On Earth” for the youngsters to choose from. Jim actively engaged in outreach to schools in the surrounding area. Schools and Youth groups from fourteen locations took part in the Project. 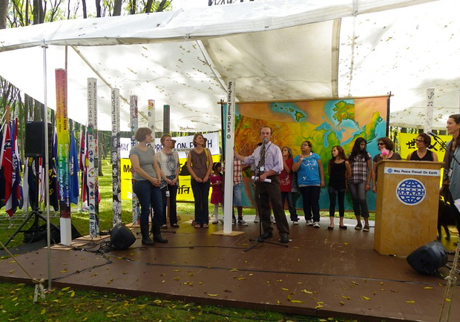 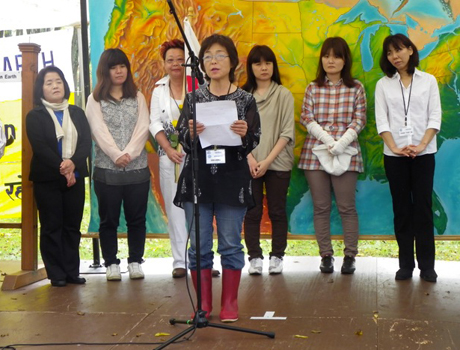 Taiko drumming by the very energetic and talented Keizo Aoi.

Representatives from non-profit organizations came to share their social services and community volunteerism.