The Symphony of Peace Prayer Day (SOPP) held at the Mt. Fuji Sanctuary was the commencement for World Shift Day, starting a ripple of meditation and prayer events around the world. Over ten-thousand people gathered on this day and sat outdoors at the foot of Mt. Fuji.

The skies were clear of clouds, blanketed by hues of blue as the sun blessed us with the assurance of a ‘new day dawning’ as people from all walks of life, culture and faiths joined us in prayer for the World Shift Day. Participants gathered from around the globe in the spirit of peace, harmony, compassion and love. For many it was their first time attending SOPP, for others it was coming home, as people reconnected with one another through warm embraces and conversations of peace and unity. On this day during the four hour Ceremony at the foothills of Mt. Fuji, attendees united as ONE, offering Prayers for Peace. 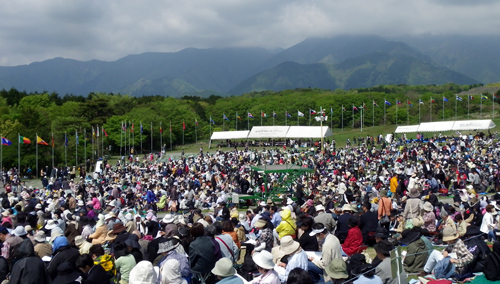 Mrs. Masami Saionji, Chairperson of Byakko began the ceremony by welcoming everyone to the sacred land of Fuji Sanctuary. Mrs. Sainonji, kindly informed the participants that the prayers on this day would envelop all the people who we are close to and whom we meet every day in our lives with a wondrous light. She went on to say, “’Symphony of Peace Prayers’ is a powerful, light-filled phrase that contains within it a wish, a vision, and a mission for humanity to live in happiness, peace, health, and harmony, and for each individual to accomplish his or her sacred purpose in this world.”

Mr. Tomohiko Naya, President of Byakko gave the welcoming address. He offered gratitude to each and every one of us who came from around the world to participate in SOPP. In his address he said, “The essence of the SOPP is in praying together, transcending all religious boundaries. With respect for one another, gratitude for all existence, and a spirit of great harmony that is born from a loving and open heart, we will realize a world where we pray with one voice the peace prayers of different faiths and nations.”

Following a presentation of universal mudras by Byakko Shinko Kai. 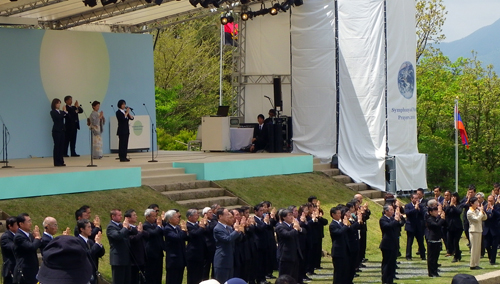 The breathtaking view of the flags, as each national flag was presented by flag bearers as they walked in beautiful formation as the prayers for peace for each country was spoken in its native language and recited by each and every voice. The 192 world countries and all the other regions of the world were prayed for on this day. 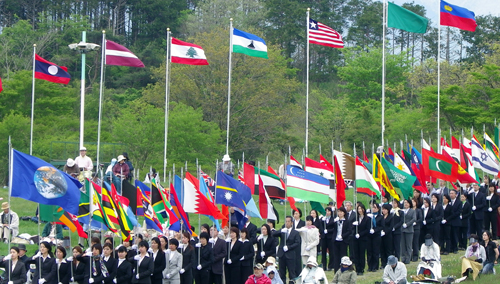 The grand finale left most of us with tears in our eyes, as the Universal Flag was displayed in a beautiful dance on the stage. After the sound of the bell, everyone together started to meditate on “Peace” by reciting May Peace Prevail On Earth for 1 minute with powerful intention. 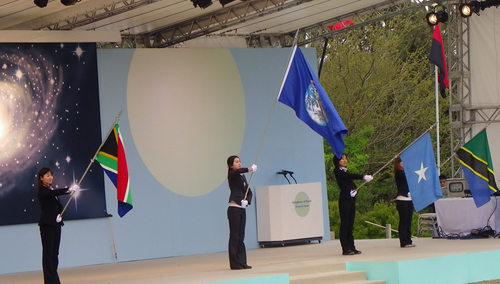 Mr. Christopher Currell a musician and artist from the United States performed through his Cosmic instruments as he guided the audience in Universal Meditation through Cosmic Sounds and Music. He gave us the message, “Light is a creative source. The universe is an echo of the creative source…fundamentally a vibration. Everything is a result of a creative thought.”

This year we were joined by nine youth representatives from various parts of the world who have been inspired by the theme of SOPP and who plan on organizing local SOPP ceremonies in their home countries. They each spoke and left us with their messages of peace and hope for the future. Each is actively working for peace in a variety of fields.

Ms. Yuka Saionji, Deputy Chairperson gave her closing remarks. Offering her gratitude to each and every one of us.

”From my personal perspective, I cannot begin to express the energy and vibrations which I felt. It was and is still awe inspiring to me and continues to bring me to a place of great joy when I remember that moment in which I will carry with me forever.”