On Martin Luther King Day 2008, two Peace Poles were planted as a group of dedicated peaceworkers gathered at the Abode of the Message in New Lebanon in upstate New York. Wahida and Michael Young, two Sufi ministers, called Cherags, created a beautiful ceremony to commemorate the occasion that combined the Universal Worship service and the World Peace Prayer. As “May Peace Prevails On Earth” was affirmed in eight different languages, candles on the altar were lit, each honoring a different tradition, acknowledging they are all part of one and the same light. Everyone was deeply moved by listening to a recording of Martin Luther King’s “I Had Dream” speech in Washington DC.

Tonia Shoumatoff read an excerpt from the writings of Masahisa Goi and followed by declaring the Prayer for Peace in Japanese. 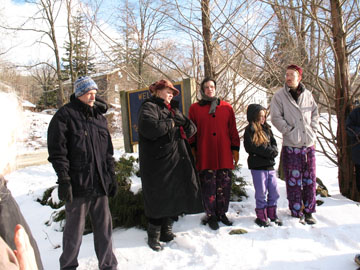 The group trouped out singing to bless the peace poles with sage, one by the entrance of the Abode of the Message and the other by the meditation hall. They placed lovely rocks that had been handpainted by children from the Mountain Roads School in front of each Pole. There was a great feeling of love and harmony as the group left the poles arm in arm singing “Let Peace Begin with Me” and shared in a delicious offering of food from the Abode kitchen. 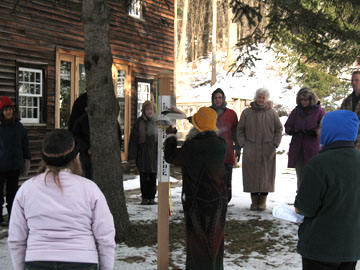 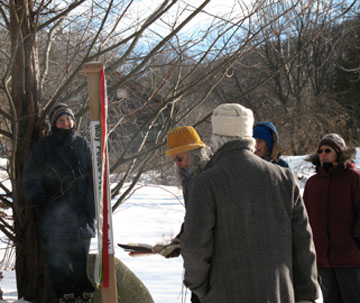