Mr. Jagdish Gandhi, Peace Rep of WPPS and Director of the City Montessori School (CMS) in Lucknow, India, organizes World Peace Prayer Ceremonies on an ongoing basis to instill the spirit of peace, harmony and cooperation in the hearts of his students.

On the occasion of THE 8TH INTERNATIONAL CONFERENCE OF CHIEF JUSTICES OF THE WORLD last December, CMS organized a World Peace Prayer Ceremony. The program was started by the World Citizen who made the following declaration: “I am the world citizen. I belong to all countries and entire humanity. I stand for peace and harmony in all countries of the world.” The World Citizen’s declaration was followed by prayers for each region of the world.

On the occasion of THE 6TH INTERNATIONAL CULTURAL FESTIVAL FOR WORLD PEACE, Dramatics, Art & Painting, Orchestra, Choral Singing, Choreography and Traditional Dance participants from Sri Lanka, Pakistan, Congo, Nepal and various states of India took part in the event. The program commenced with a school prayer, all-religions prayer, a mock World Parliament and spectacular World Peace Prayer Ceremony. Around 200 school children representing UN member nations, dressed in national costumes, held their national flags. Continental groups from all six continents, UN representatives and a World Citizen all prayed for peace in every part of the world. The groups rendered the prayer “May Peace Prevail On Earth. May peace be in all countries of North America.” In a grand finale, the world peace song was sung in unison by all flag bearers and representatives of each region. 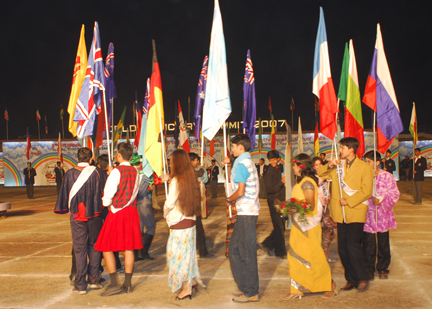 MAY PEACE BE IN INDIA.