The Chapel at Croton Falls held a glorious Symphony of Peace Prayers on Sunday, May 14th, also celebrating Mothers Day. Among the many people who attended were longtime friends of the World Peace Prayer Society, including Dr. Jude Currivan, Monica & Dave Willard, Chris & Amy Farrell, Sara Niccolls, and Kristin Hoffman. A 6-page printed program included information on the Symphony of Peace Prayers in Japan and around the world, a message from Masami Saionji, prayers of different faiths to recite, an introduction to Dr. Jude Currivan, and an announcement of the World Peace Prayer Ceremony with the flags of all nations. 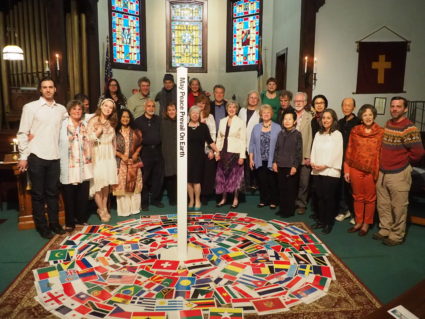 Rev. Deborah Moldow began the Interfaith Sunday by asking Monica Willard to distribute roses to everyone for a special acknowledgement of our mothers. Each person held a rose and called out the name of his or her mother, returning the flowers to the vase, so that all the energy of our mothers’ love would enhance our prayers for peace. She also asked everyone to experiment in taking a “WholeWorld-View,” according to Dr. Currivan’s work, where we would see the prayer not as belonging to other people, but as part of our own great diversity. In the same way, everyone was asked to view the countries represented by their flags not as foreign, but as our children.

We then shared prayers from many traditions, led by various guests with everyone joining in: 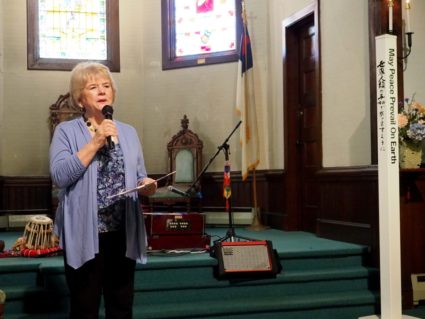 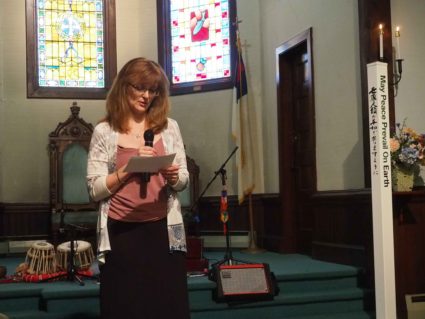 Special thanks to our guest speaker, Dr. Jude Currivan, who spoke movingly about her own mother, as well as about her work demonstrating how a shift to a “WholeWorld-View,” based on her new book, “The Cosmic Hologram,” can give us an empowering perspective on how to address the critical challenges of our world. 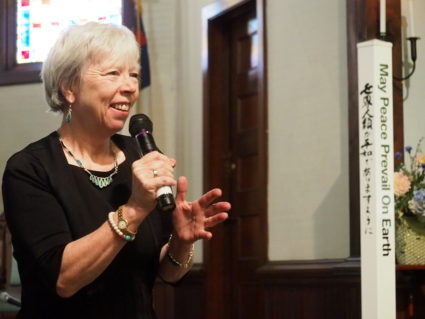 Dr. Currivan had been part of the Symphony of Peace Prayers held at Fuji Sanctuary in 2016 along with Deborah and Monica, celebrating the launch of the Soul of Women campaign. Songstress Kristin Hoffman helped launch the Fuji Declaration with her sublime voice at Mt. Fuji in 2015. 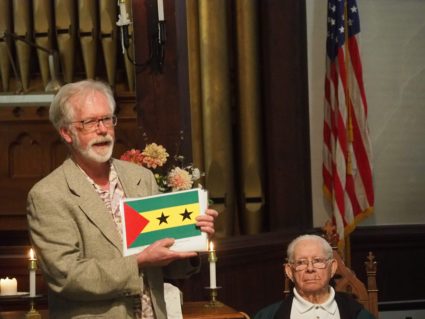 Following Dr. Currivan’s inspiring words, all took part in a World Peace Prayer Ceremony, with the flag cards forming a mandala of the world around the base of the Peace Pole. Two elders of the church sat up front with the UN flag and the Earth flag. Each person came forward with several flags, reading each name in turn as all present responded, “May peace prevail in [that country].” 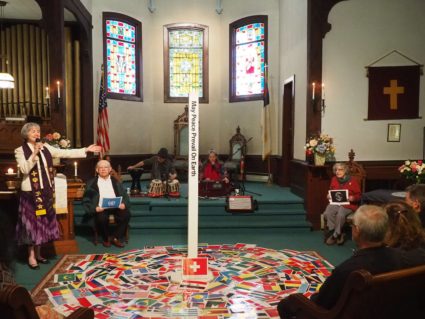 During the ceremony, singer/musician Miriam ‘Sita’ Zernis and drummer Fumio Taniguchi of Sita’s Light played an original Kirtan chant based on “May Peace Prevail on Earth.” 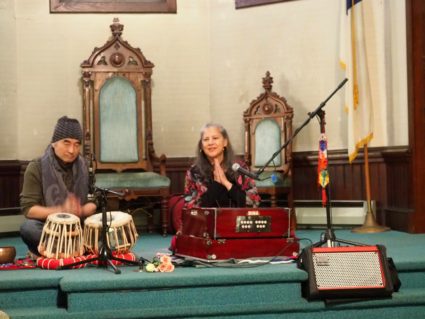 At the close of the ceremony, the pace of the drumming increased and everyone stood to sing along joyfully. 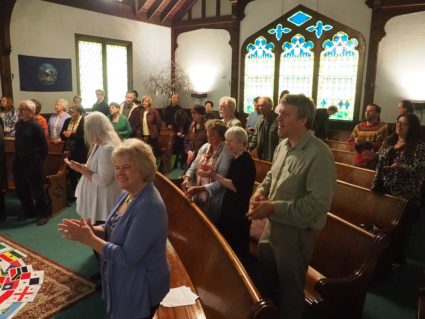