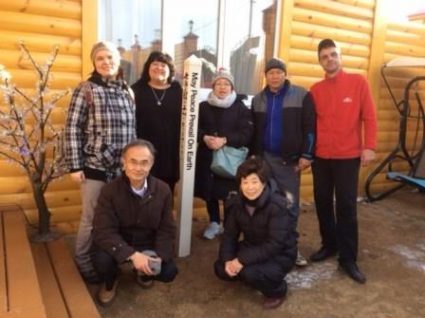 Lake Baikal is considered the oldest ( 25 million years) and deepest lake in the world.  It contains 20% of the world’s total unfrozen freshwater reserve.

We stayed at the hotel in Fujil village in Orion Island where the Buryat tribes live.

He informed us that people from all over the world visit the island and that he most welcomed the offering of the Peace Pole planted at his hotel.

Peace Pole at Marriot Hotel in Irukusk in Eastern Siberia-RUSSIA

On the April 18th, we stayed at Marriot hotel Irukutsk and planted a Peace Pole.  General manager of the hotel was from Lebanon and he is a great supporter of Peace and accepted our Peace Pole in his hotel.  Irukutsk is a very old and historical city that represents Eastern Siberia.

We also visited a museum, monastery and the Russian Orthodox Cathedral, offering our presents of desktop Peace Poles and Origami  paper doll bookmarks.  The people were very happy about our presents and the message of Peace.  We  also made an honorary visit to the Japanese cemetery by Lake Baikal where many Japanese soldiers were captured and forced to labor after WWII and died in the frozen land.