Rev. Patrick McCollum, international peacemaker and creator of the World Peace Violin, journeyed to Standing Rock in early November as an extension of his longtime commitment to supporting Native Americans with land issues. 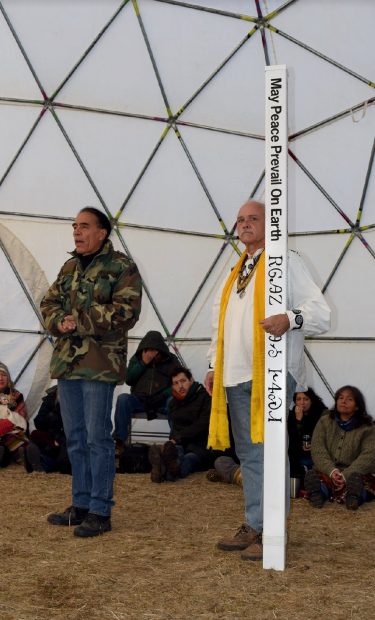 Before leaving, he asked whether there was a Peace Pole at Standing Rock. Not yet! As he put it, the team at the World Peace Prayer Society “sprang into action.”

An 8’ Peace Pole was prepared specially for his journey, with the prayer “May Peace Prevail On Earth” in five indigenous American languages (Cherokee, Chichewa, Cree, Lakota, and Mohawk), plus English, Spanish and Gaelic, to honor Patrick’s own tradition. It was immediately shipped to a rendez-vous point in South Dakota for the final leg of the trip.

Patrick reported on the many challenges faced by the representatives of more than 100 tribes gathered there, all with the same stand: to protect our water. He was honored with a Lakota name, “He Who Speaks With The Mother.” He presented the Peace Pole to a group of elders from different indigenous nations and announced that the gift was received with gratitude, respect and 100% support! 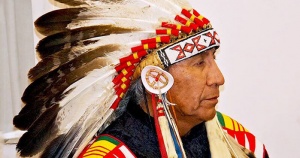 The elders prefer not to be named, since the political situation is intense. Only Lakota/Dakota/Nakota Chief Arvol Looking Horse, Keeper of Sacred White Buffalo Calf Pipe and member of the Founding Advisory Board of the World Peace Prayer Society, has gone public with his appeal. The photo, by Native American documentary film maker Irene Fredericks, was taken at the meeting dome located in the center of Oceti Sakowin Camp, the camp of the elders representing the seven treaty nations.

The elders do not know whether they will be able to plant the Peace Pole in the ground, since there are many considerations as winter rapidly approaches. However, they are requesting that different tribes and organizations have their people focus on the Peace Pole to send their prayers to the conflict.

The Peace Pole, although it is never used to promote a political position, is a globally recognized symbol of peace and unity. May it bring healing to Standing Rock and the Native Americans whose ancestors first inhabited our beautiful land.

Infinite gratitude to Patrick McCollum for carrying the Peace Pole to Standing Rock with the love and prayers of so many.