Jules Lamore staff of The World Peace Prayer Society had the privilege of participating in the 10th World Peace Forum which was being held this year in Florianopólis, Brazil.

The event hosted close to 2000 peacemakers who participated in numerous events and workshops.  The World Peace Prayer society brought three of their projects to The World Peace Forum; The Peace Pole Project, Peace Pals International and World Peace Youth.

On Thursday, September 22nd the streets of Florianopólis were filled with the March of The Babies which included a beautiful flag ceremony which took us all the offices of the Mayor of Florianopólis. 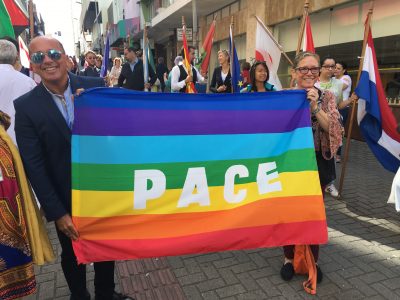 When we arrived to the Mayors office a beautiful Peace Pole was presented to Mayor César Souza, Junior on behalf of the city of Florianopólis.  A beautiful ceremony took place in the city offices where a hundred people joined in to celebrate and welcome the Peace Pole to the city.  The room was filled with young people holding the flags from every nation.  At the end of the ceremony everyone joined in by saying “Que a paz prevaleça no mundo” – “May Peace Prevail On Earth” in Portuguese. 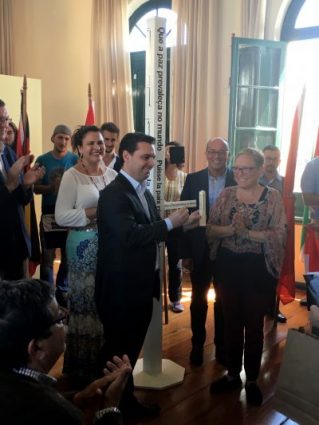 The Peace Pole which has 8 languages (English, Japanese, Portuguese, French, Arabic, German, Italian and Spanish) will find a permanent home in the Old House and Jail which was built between 1771 and 1780. The plans are to turn the old jail into a museum of Peace. 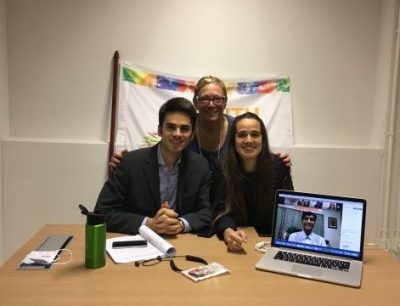 Friday morning World Peace Youth held its 3rd live webinar from the World Peace Forum and invited youth from around the world to take part.  The moderators (as seen in the photo) interviewed speakers on various topics. 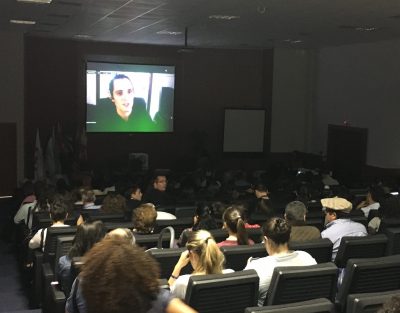 The live webinar was broadcast live in an auditorium where youth in Brazil could also participate.  Please click here to watch the live webinar on YouTube. 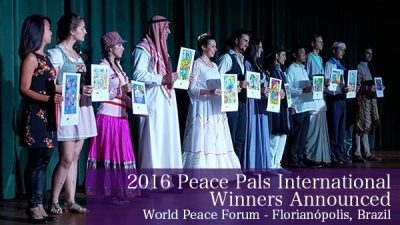 On Sunday during the closing ceremonies, Peace Pals International announced the winners of the The Peace Pals International Arts Exhibition and Awards during a live broadcast.  The stage was filled with 12 young people dressed in their native costumes who were there to announce each of the 12 winners.  We thanked the 12 young people by presenting them each with a mini peace pole.  You can watch the live event on YouTube and visit Peace Pals International to see the winners and finalists.  At the end of the awards presentation you could hear the voices of a thousand saying three times  “Que a paz prevaleça no mundo” – “May Peace Prevail On Earth” in Portuguese. 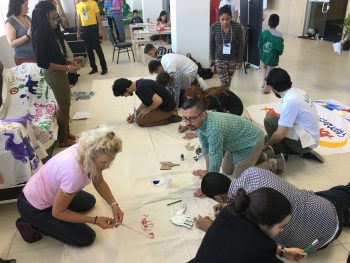 There were so many wonderful organizations and projects participating at The World Peace Forum in Brazil this year. Elephants for Peace. The elephant was chosen as a symbol because it marries power with peace. Here people were invited to paint their vision of the Elephant.  The finished artwork was spectacular. 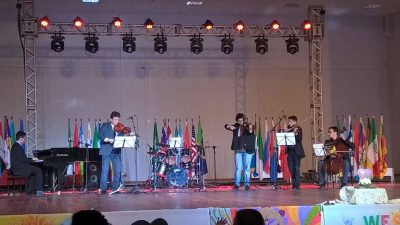 We had the joy of being able to listen to the orchestra of Roney Marczak.  Roney is an incredible musician who educates marginalized youth in Brazil through music.  Learn more about Roney Marczak and his music.

We wish we could share all of the spectacular people and their projects with you.  If you visit The World Peace Forum on their Facebook Page, you will see more.

May Peace Prevail On Earth – “Que a paz prevaleça no mundo