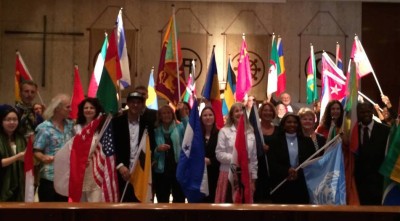 The event was entitled, “The Quest for a Just and Sustainable Peace,” with a keynote address on “A Tale of Two 70s: The 70th Anniversary of the Founding of the United Nations and the Hiroshima/Nagasaki Atomic Bombing.”  The winning artwork of the 2015 Peace Pals Art Exhibition with the theme “Love to Hiroshima–Love to Nagasaki” was on display throughout the day. 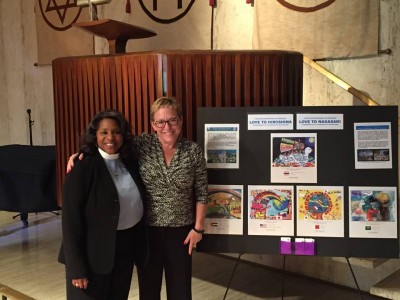 The Chaplain for the Church Center, which is run by the United Methodist Women, is Rev. Dionne Boissiere. She now has her own desktop Peace Pole, which she placed in a special area where those in attendance could write their prayers on a ribbon to post on a board. The Chapel was filled with prayers for peace all day long. Rev. Boissiere also put out a call to churches to ring their bells at 12 noon and for everyone to Tweet, #MayPeacePrevailOnEarth! 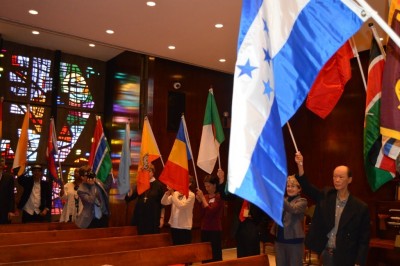 The World Peace Prayer Society held a World Peace Prayer Ceremony with the flags of all nations at 3:00, following the hourly Minute of Silence, accompanied by the Society’s Peace Bell made of recycled weapons of war. The flags has been raised that morning by students at the bell ringing ceremony by the Secretary-General of the United Nations. Now each one was presented in turn as everyone sent a prayer for peace to prevail in each country of the world in turn, accompanied by the transcendent music of the World Peace Violin. 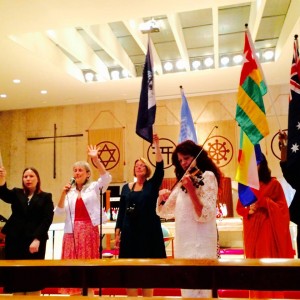 Many special friends of the World Peace Prayer Society took part in the prayers, including Andrew Benson Greene of Sierra Leone, who has long worked with Bockarie Enssah, our Peace Representative there. He is an accomplished poet, who has written a book of poetry called “The Peace Pole.” 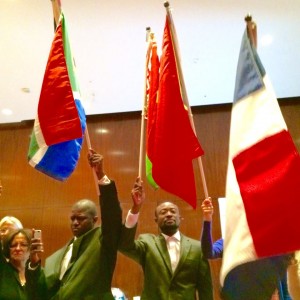 This heartfelt call to peace from the United Nations was surely felt around the world. May Peace Prevail on Earth.