The granite Peace Pole bears the Universal Peace Message “May Peace Prevail On Earth” in eight languages: English, Spanish, French, Russian, Arabic, Hebrew, Nepalese and a Native American language. Beneath the Peace Pole, a small plaque tells viewers that the project is the work of the Ada Sunrise Rotary Club. 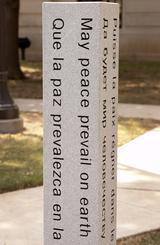 The Peace Pole reflects Rotary International’s theme for 2013, which is “Peace through Service.” Rotary clubs around the world were encouraged to find projects dealing with peace and conflict resolution.

McFarlane, Executive Secretary of Sunrise Rotary Club came up with the idea for a Peace Pole as a peace project when she visited her daughter’s church in Shawnee, where she saw a Peace Pole in the church yard. She asked about the Peace Pole and discovered that the international Peace Pole Project, a project of The World Peace Prayer Society places Peace Poles throughout the world.

The Peace Pole was installed in August, and Sunrise Rotary hosted a dedication ceremony at the courthouse on Oct. 25 — the day after United Nations Day, which celebrates the anniversary of the United Nations.