Let The Bells of Peace Ring

Reverend Dr. T. Kenjitsu Nakagaki, Japanese Buddhist Priest, President of the Buddhist Council of New York and Vice Chair of the Interfaith Center of New York, hosted his 19th annual Hiroshima Day event in New York City, this year at the chapel of the Interchurch Center on Riverside Drive. More than 200 people attended this deeply moving service commemorating the atomic bomb blasts over Hiroshima and Nagasaki in 1945. 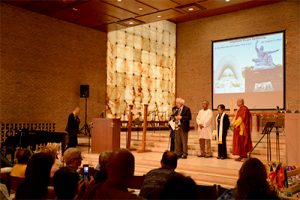 Offerings included prayers by representatives of different religions, messages from the mayors of Hiroshima and Nagasaki, peace poems by Holocaust survivor Greta Elbogen, and sharing by Tomiko Morimoto West, a Hiroshima survivor or “hibakusha.” There was beautiful music performed by soprano StacyLyn Bennett, shakuhachi flute player Ronnie Seldin, and Japanese pop star Shinji Harada, as well as a film on the Nagasaki blast.

The World Peace Prayer Society, a supporter of this event for many years, was represented by Rev. Deborah Moldow, who gave a brief speech explaining the origin of the WPPS Peace Bell, a gift from the War and Peace Foundation made of recycled weapons of war. She compared the repurposing of the metal in the gong to the transformed spirit of the Japanese people who asked for peace rather than vengeance.

Everyone held one of the WPPS flags of the world for the ringing of the Peace Bell at 7:15 p.m., simultaneously with the bell rung in Hiroshima at 8:15 a.m., the time the bomb exploded. The presenters each rang the bell and said a brief prayer or slogan that was repeated by the audience, with Deborah saying, “May Peace Prevail on Earth” and T.K. saying the same prayer in Japanese. 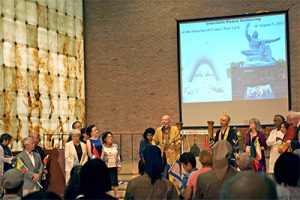 For the finale, Pete Seeger led everyone in a moving song he composed for the annual commemoration, as the flags of the world waved together in one united voice for peace.

There is a video of the event at http://www.youtube.com/watch?v=fmpnXRgrX9Y