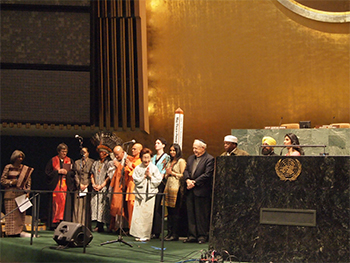 Mrs. Masami Saionji had a vision: she saw a Symphony of Peace Prayers at the United Nations. She saw people of all faiths offering prayers for peace, followed by the flags of all nations lifted in a shared call for peace on Earth. She saw an expression of global unity that would propel the United Nations and all of its member states into a new era of peace.
This vision came to life on February 14th, when 1500 people gathered in the UN General Assembly for a 3-hour event called United For A Culture of Peace Through Interfaith Harmony, in honor of World Interfaith Harmony Week. 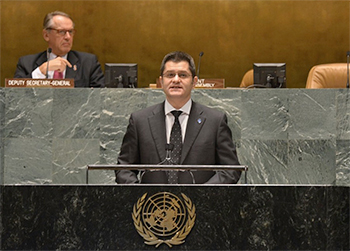 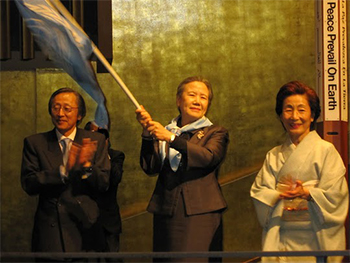 The audience was then treated to a beautiful and heart-filled performance by young Filipino soprano Katherina Saporsantos. Distinguished speakers from the United Nations, UNESCO and civil society then offered insights on the topic of The Role of Interfaith Harmony in the Peaceful Settlement of Disputes.

Mrs. Masami Saionji, Chairperson of The World Peace Prayer Society and Byakko Shinko Kai took the stage to introduce the heart of the program, the Symphony of Peace Prayers. She said, “The prayers of many faiths that will be offered here at the United Nations shall help us transcend the walls of separation, and bring new inspiration to the global community. I firmly believe that this will be a historic event to open the door to a bright and peaceful future.”

Representatives of Indigenous, Baha’i, Buddhist, Christian, Hindu, Humanist, Jain, Jewish, Muslim, Sikh, and Zoroastrian faiths offered their prayers and then stood before the Peace Pole on the stage. Mrs. Saionji joined them for a final bow, bringing the whole world of diversity together in love. 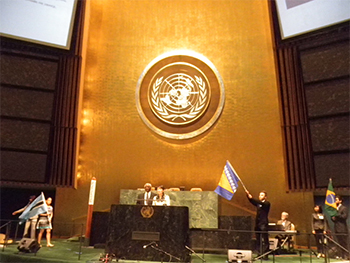 32 children from the UN International School Junior Four Chorus came forward to sing songs of peace. The audience rose to its feet in joy!
Mr. Hiroo Saionji, President of The World Peace Prayer Society and The Goi Peace Foundation, introduced the grand finale of the program, the World Peace Flag Ceremony. He said that, “A true culture of peace is built when we come to understand and respect our differences and appreciate our diversity.” Mr. Saionji mentioned that the ceremony would be very special because, “the flags will be raised by UN staff members, international college students and other volunteers—many of them a native of that country in their national costume.”
The audience was asked to rise, holding the paper flags that had been inserted into each program, to say together the invocation, “May Peace Prevail on Earth.” The grand pageant began as Dr. Noel Brown and Dr. Maki Kawamura announced the name of each Member State while its flag was presented, accompanied by Chris Farrell’s meditative music. Everyone said together, “May peace be in” every nation. 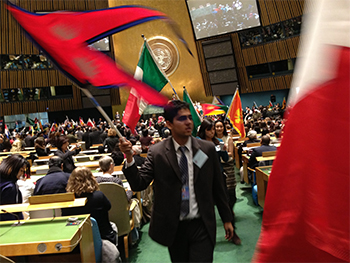 At that moment, the Unity Made Visible Interfaith Chorus led everyone in song as the flag bearers paraded out. Monica Willard, President of the Committee of Religious NGOs at the United Nations, delivered a heartfelt vote of thanks, with all the speakers and organizers surrounding her on the stage.

The United Nations General Assembly was aglow with the spirit of unity, love and peace. The event had demonstrated – through words, prayers, music and the flags of all nations – the magnificent diversity of the human family, standing “United For A Culture of Peace Through Interfaith Harmony.” All present were filled with one shared call from the heart: May Peace Prevail on Earth!