Hello Ms. Fumi-Johns Stewart and happy new year. I am writing at long last to send you information about the dedication of the two Peace Poles at U.S. Embassy Bucharest earlier this Fall.

The day was an important milestone for the Embassy and for Romania – we are very honored to be the home of two Peace Poles.

I want to say that I very much appreciate the wonderful way in which you all took care to make sure we had the Peace Poles in time, I’m only sorry that our Ambassador was way-laid by other urgencies that demanded his attention away from this project. As you’ll see from the photos, the Peace Pole do look wonderful in place on the grounds of the new Embassy here in Bucharest and the reception for them among staff and visitors has been wonderful.

It’s been a pleasure to work with your organization and I hope to be able to do so again; thank you for what you do around the world to envision and bring about peace. And thank you for your patience with us!

Best wishes for your continued success in 2012 and beyond; I hope that our paths will cross again in the future.

Two Peace Poles were recently dedicated at the new Embassy compound at the U.S. Embassy in Bucharest Romania. Coinciding with the U.S. government’s move to the new compound located just north of Bucharest; over 50 staff along with dignitaries from the Romanian Ministry of Foreign Affairs attended the Peace Pole Dedication Ceremony led by Deputy Chief of Mission, Duane Butcher. 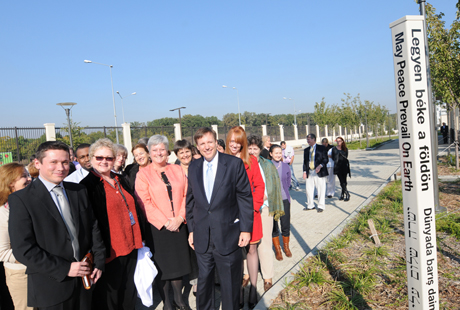 The two Peace Poles, one installed in the Consular Section’s Garden and the other near the Embassy’s main entrance, host the phrase “May Peace Prevail On Earth” in 16 languages, all of which are spoken in Romania or in the neighboring countries. Embassy staff gathered for the dedication ceremony and “May Peace Prevail On Earth” was spoken in each of the featured languages by a native speaker of the language among the staff members and dignitaries gathered. Several group photos were taken as well to document the historic occasion.

The Peace Poles are believed to be the first planted at an American Embassy abroad and an estimated 400 people pass by the Peace Poles each work day.