Fumi Johns-Stewart, WPPS Executive Director, Deborah Moldow, WPPS, Representative at the UN and Monica Willard, WPPS Peace Representative attended the joint exhibition entitled “Against Nuclear Arms” which opened with a ceremony and reception on Monday, 10 August in the Main Gallery of the Visitors Lobby.

It will remain on display until 30 September.

The exhibitions portray the destruction and terrible damage caused by the A-bomb explosions in Hiroshima and Nagasaki, Japan, and decades of nuclear arms testing in the heart of Kazakhstan.  Its goal is to deepen public understanding of the devastating consequences of the use of nuclear weapons and to advance the international movement to abolish nuclear weapons. 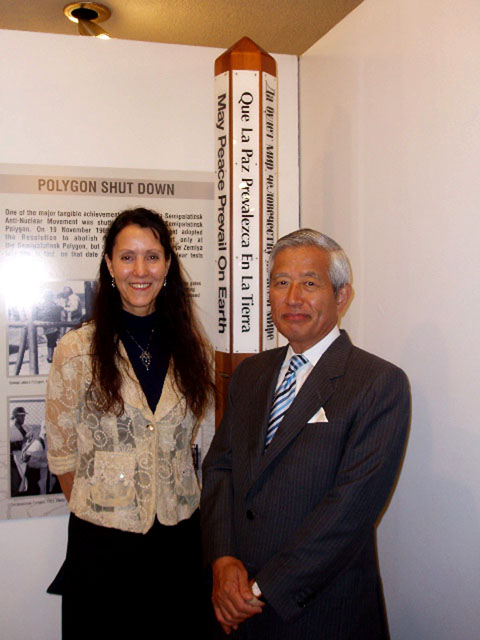 “Hope of Hiroshima and Nagasaki” highlights the destruction caused by the bombs, the recovery process and survivors’ renderings.  It also includes a presentation of the work of HICARE, the Hiroshima International Council for Health Care of the Radiation-Exposed, established after the 1986 Chernobyl disaster to promote international cooperation.

“The Untold Story of Semipalatinsk Polygon” recounts the untold story of nuclear tests in central Kazakhstan; the medical, social and environmental consequences on population, flora and fauna of the region, the plight of victims scarred from more than four decades of nuclear tests and Kazakhstan’s 1992 commitments to become free of nuclear weapons.

Also forming part of the exhibit are a selection of computer collage artworks by two artists, photographer and video artist Masaru Tanaka, the son of an atomic bomb survivor, and painter Betsie Miller-Kusz, the daughter of a physicist who worked on the Manhattan Project in 1945.  Both artists have collaborated to create peace through their artworks.  The display of these artworks has been made possible by ART Peace.

This exhibition is presented by the United Nations Permanent Missions of Japan and Kazakhstan, as part of ongoing efforts for nuclear disarmament and non-proliferation, and in view of next year’s Review Conference of the Parties to the Treaty on the Non-Proliferation of Nuclear Weapons.  The exhibit is presented in cooperation with Hiroshima City, Nagasaki City, Semey City, HICARE and the National Nuclear Center and Central State Archive of Kazakhstan.  MAY PEACE PREVAIL ON EARTH!