Elkader was named for Emir Abdelkader, an Algerian leader who was Muslim. Elkader is an agricultural county seat in Northeast Iowa, with currently approximately 1250 residents. Elkader’s sister city is Mascara, Algeria. A Peace Pole in a small park area outside of City Hall has a matching Peace Pole in Mascara. Peace UCC is located one block from City Hall, both on Main Street.

Peace UCC is an Open and Affirming congregation of the United Church of Christ. The denomination has many firsts to its credit: the first woman ordained to the ministry, the first African American ordained to the ministry, the denomination that stood up in court for those on the Amistad slave ship, the first major denomination to support marriage equality. The list goes on and on, but one key point in the denomination’s history is that one of our ministers was a missionary who helped put the Algonquin tribal language into the written word, resulting in publication of The Eliot Indian Bible (officially: Mamusse Wunneetupanatamwe Up-Biblum God, aka: Algonquin Bible), the first Christian Bible to published in British North America. English Puritan missionary John Eliot produced a translation of the Geneva Bible into the Indian Massachusett language. (Wikipedia)

Many of the members of Peace UCC are from a German heritage. Some are African American, some from European heritage such as Norwegian, Danish. A nearby town called Postville suffered a blow from INS when many Spanish speaking residents were deported years ago, and yet the community deals with the splitting apart of families in 2008. Algerian residents in our sister city of Mascara speak many languages including Arabic and French. Thus our Peace Pole has eight languages: English, Arabic, Spanish, Danish, Norwegian, French, Algonquin, and German. 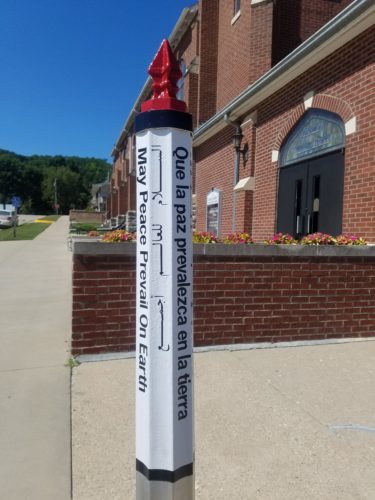 Response to the new Peace Pole outside of Peace United Church of Christ has been overwhelmingly supportive. The white, red and black of the pole are Central Community High School colors, with the school one block away from the Church. The base of the Peace Pole is in silver, the color of all street sign poles throughout the city.