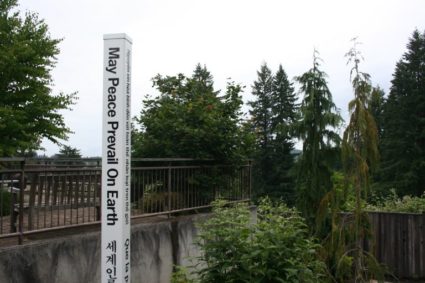 On April 21st, Children’s Center joined multiple Rotarian groups in the Pacific Northwest and Portland Metro for a special Peace Pole Planting, where numerous Peace Poles were planted and established in the community. Each Peace Pole bears the message “May Peace Prevail on Earth” in different languages.

At the invitation of Linda Cohen, and with support from the Jubitz Family Foundation, Children’s Center recently planted a new “Peace Pole” in our Healing Garden. Proclaiming “May Peace Prevail on Earth” in eight languages, it reminds all who arrive of the hope that underpins our daily work. Similar monuments now stand in more than 120 Tri-County locations, and in 180 countries—as of 2017, Peace Poles have been planted in every country around the world.

Last month, I was a guest of the eighth-grade students at the Oregon Islamic Academy of the Muslim Educational Trust. In partnership with PGE and The Oregon Community Foundation, the students in “Community 101” invited and evaluated grant proposals from organizations serving victims of abuse and neglect. Children’s Center received the largest award: $1,500 to support our Intake and Family Support team. During the check presentation, the students described how this initiative epitomized their peaceful faith. Their efforts truly brought the sentiment on our Peace Pole to life.

Sadly, one week after my visit with these inspiring students, two young women—one of whom was wearing a hijab—were verbally attacked on a Tri-Met MAX train. Two men who attempted to intervene were killed and a third was seriously wounded. The incident sent shock waves across the country.

I can’t fathom the roots of such hatred. But, like Martin Luther King, I believe in “the bright daybreak of peace.” In this instance, I’m heartened by the community’s support for all the victims—including and especially the women. The outpouring of sympathy and understanding attests to love’s enduring power over hate.

In our lobby, we have a sign (in four languages) explaining that Children’s Center is a “Safe Zone.” Soon, we’ll add another message—one that is being displayed by many like-hearted organizations: We gladly welcome ALL races, ALL religions, ALL countries of origin, ALL sexual orientations, ALL genders. We stand with you. You are safe here.

I look forward to the day that such proclamations are no longer necessary. In the meantime, I’m proud to be working with a staff and board for whom unarmed truth and unconditional love really are the final word.