People of all faiths called for an end to the insanity of nuclear weapons in a powerful convocation at the Tillman Chapel of the Church Center for the United Nations on Sunday, April 26, with the theme of a “A Nuclear-Free, Peaceful, Just and Sustainable World.” Many participants continued on to a rally and march through New York City organized by Peace and Planet. WPPS UN Representative Deborah Moldow was invited to lead the 250 people gathered in singing a hymn based on “Finlandia” and the now classic, “Let There Be Peace on Earth,” accompanied on piano by Rick Ulfik of We The World. She brought a Peace Pole that was placed on the central altar for the duration of the 2-hour service. 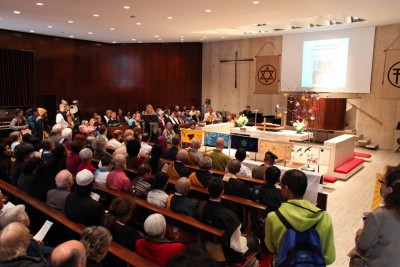 Jonathan Granoff, President of the Global Security Institute, is an attorney who has dedicated his life to ridding the world of nuclear weapons. He closed the service with an impassioned and deeply spiritual benediction, insisting that we must head the moral call not only to contain nuclear weapons, but to declare their mere possession to be unconscionable. He highlighted the Peace and Planet campaign by asking everyone present to “wave goodbye to nuclear weapons.”

In recognition of Jonathan’s new resolve to speak from his deeply held spiritual as well as legal convictions, Deborah offered him the Peace Pole with the prayer for world peace in English, Japanese, French and Spanish. He accepted it graciously, promising to bring it into many settings where the prayer is needed: May Peace Prevail on Earth!

Jonathan Granoff is also an honorary signatory to the Fuji Declaration. 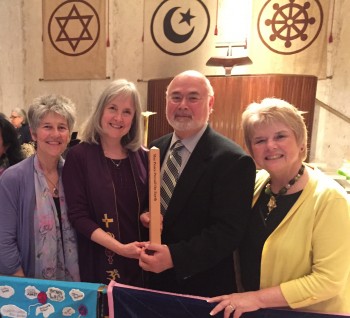