The trophy, which bears the universal peace message “May Peace Prevail On Earth” was given to honor IGAD’s work in Conflict Prevention Management and Resolution through the Conflict Early Warning and Response Mechanism, an effort in enhancing regional integration and controlling drought and infrastructure development across the region.

The Ambassador of the Republic of the Sudan to Djibouti and Permanent Representative to IGAD, HE Hussein Elamin Elfadil, on behalf of IGAD member states, along with the Executive Secretary of IGAD, Ambassador Mahboub Maalim, received the award from Ambassador Mussie Hailu, URI Regional Director for Africa and Representative of URI to the United Nations Office in Africa, Economic Commission for Africa and the African Union Commission. The award ceremony took place at Djibouti Palace Kempinski in Djibouti, North Africa. 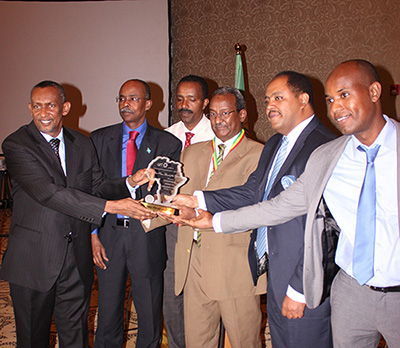