The Chapel at Croton Falls in Westchester, NY celebrated its third annual Symphony of Peace Prayers on Sunday, May 19, 2013. The joyful event, organized by WPPS UN Representative Deborah Moldow, who is an ordained Interfaith Minister, included peace prayers of many faiths. 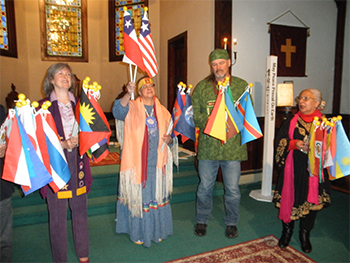 The flag of every nation was then raised in turn, and everyone said “May Peace Be in [that country].” Three prayers were said for the United States as a former Marine raised the flag. Finally, with all flags raised high and pointed toward Grandmother SilverStar holding the Earth Flag, everyone closed the ceremony with “May Peace Prevail on Earth” three times and a long silence to hold the energy.

Chapel organist June Tompkins played “Let There Be Peace on Earth,” and all gathered sang while holding hands and sharing a circle of love, light and peace. All commented on the beauty of the event and the powerful feeling of unity. Sunera Rahman said, “This feels so good I wish I could do it every day!”