International Day of Peace at the United Nations – USA

The World Peace Prayer Society, for the 15th consecutive year, was instrumental in planning the UN observance of the International Day of Peace, along with our wonderful colleagues from the Jane Goodall Institute, the United Religions Initiative, and Pathways To Peace. We helped to set the theme of Sustainable Peace for a Sustainable Future and co-chaired the International Day of Peace NGO Committee, which this year created sub-committees called Peace Teams. With WPPS Representative to the UN Deborah Moldow speaking at events in Hong Kong and Linzhou, Henan Province, China , former WPPS staff member Dr. Arthur Romano stepped in to assure that the traditions WPPS had established were carried out, including the students raising the flags for the Secretary-General’s ringing of the Peace Bell in the morning, the Peace Pole in the room for the student observance, and the 12 noon Minute of Silence with Mrs. Ban ringing the WPPS Peace Bell and all 500 students raising the WPPS paper flags of all nations for a Minute of Silence. The students said, “May Peace Be in [whatever country whose flag they were holding],” followed by “May Peace Prevail on Earth.” Then everyone sang John Lennon’s “Imagine,” while waving the country flags. 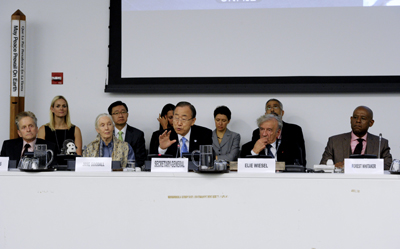 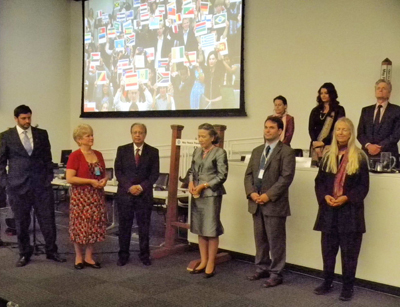 A team led by Paul Sladkus of the Good News Broadcast brought some of the flags raised in the UN Rose Garden to Times Square for a public Minute of Silence at 12 noon. Joined by peace walker Danny Garcia raising a Peace Pole high, everyone chanted, “May Peace Prevail on Earth.” 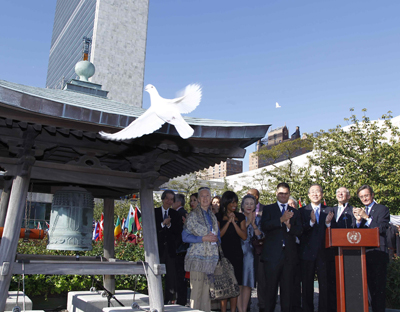