Ms. Ina Edelweiss of Germany organized the 4th Annual Alexanderplatz Peace Festival . There were tourists from many countries and peace workers from many organizations who attended. 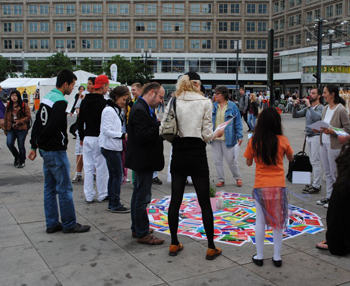 Each day had a different theme: 1 day in recognition of the United Nations, 1 day for Human Rights, 1 day for organizations to share their personal peace mission.

Dagmar Berkenberg of The World Peace Prayer Society(WPPS) in Munich, Germany, participated in the festival with an information booth, two passages read from books authored by Mrs. Masami Saionji, Chairperson of WPPS and a World Peace Prayer Ceremony.