The Committee of Religious NGOs at the UN and the Mission of the Republic of the Philippines to the United Nations hosted an annual luncheon inter-religious dialogue and cooperation on May 24, 2012. More than eighty people attended, including thirty Mission personnel and representatives of fifteen agencies, as well as NGOs of different faith-based organizations. There was a rich sharing of inspiring partnerships hard at work around the world, while all enjoyed a lovely lunch organized by WPPS Peace Rep Monica Willard, who chairs the committee. 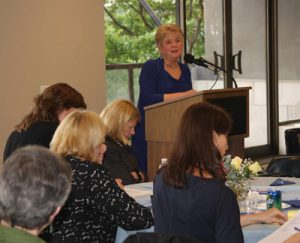 WPPS UN Representative Deborah Moldow, who was an MC for the event, provided greeting cards to be signed by everyone at each of the eleven tables. These cards were for the people of the Japanese town of Rikuzentakata, which was devastated by the 2011 earthquake and tsunami. The RNGOs had heard a moving report on their plight earlier in the year, organized by Hiro Sakurai of Soka Gakkai international. All the ambassadors, UN staff and NGOs sent their prayers and loving support to the people there. Hiro, who will hand deliver the cards in July, added “May Peace Prevail on Earth” to each card in Japanese, saying, “This will be such as powerful encouragement for the people of Rikuzentakata.” 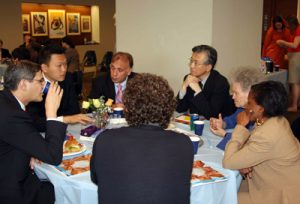