The interfaith team at the Chapel at Croton Falls hosted a Symphony of Peace Prayers on Sunday, May 20, 2012 as a special edition of its regular Interfaith Sundays. The service began with prayers for peace led by representatives of diverse faiths, including Rev. Hans Hallundbaek (Christian), Rabbi Shoshana Mitrani-Knapp (Jewish), Renuka Kumar (Hindu), and Sunera Rahman (Muslim), as well as a special demonstration of Japanese prayers by members of Byakko Shinko Kai. Then everyone took part in a World Peace Prayer Ceremony with the flags of all nations. A regular member of the congregation was moved to tears as she led the prayer for her native Vanuatu, raising its flag for the first time since leaving her home country many years ago. All were touched by profound beauty of the ceremony, which seemed to float on a cloud of chanting “May Peace Prevail on Earth,” sustained by kirtan player Miriam Zernis of Sita’s Light. 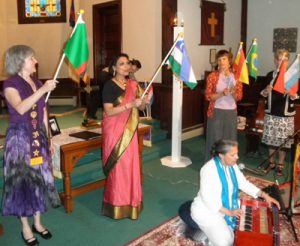 The Peace Pals Art Exhibition was also on display at the chapel, providing endless delight to the participants. Everyone appreciated not only the charming work by so many talented children but also the wide range of countries and cultures represented.