I am delighted to report news from our friend Gerry Eitner in Washington, DC. Gerry is the one who arranged to have a Peace Pole at the Pentagon, which we dedicated back in the year 2000 – the day after the UN student observance of the International Day of Peace.

The idea was originally hatched at the Jubilennium conference on the Sea of Gallilee the previous year, during a conversation I had with Gerry and Navy Chaplain Arnold Resnikoff. I told Captain Resnikoff about my dream to see a Peace Pole on all the U.S. Army bases around the world to demonstrate the purpose of our military to achieve a world at peace. He said, “Why don’t we start at the Pentagon?” 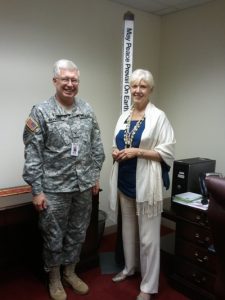 Then Gerry stepped in and accomplished the miracle: she actually made it happen!! She approached the chaplain of the Pentagon through her Children’s Cloth of Many Colors project and arranged for a wonderful dedication ceremony with James Twyman singing.

The Peace Pole had a home in a small chapel next to the chaplain’s office in the Pentagon, but then a new chaplain came on board and it was moved out of sight. He, too, moved on and now there is another chaplain, Tom Waynick. Gerry had a mutual friend ask him to find the Peace Pole and put it back up, which he did. It now stands in his office – visible again, and on view to whatever public would like to visit it.

Gerry says, “I (the eternal optimist) have a dream that this new placement of the Peace Pole at the Pentagon can begin to make a difference toward a peaceful world.”

WhatsApp
Share
Email
Tweet
Pin
Share
Posted in The Peace Pole Project
← Girl Scout Cadet Troop 3029 defines unity within their community as they make their pledge in the spirit of May Peace Prevail On Earth!Peace Pole Dedication at Rotary International event in THAILAND →