Reflections on the Victoria Garden by Christiana Goldschmidt Summer 2010

Ah, June 3rd—that wonderful day way back when the summer was young. When I was a fresh face in the community, hardly knowing a soul in Frogtown and Summit University. When I had yet to discover all that the summer could contain and become. When the open lot on the corner of Victoria and Concordia was but a grassy field.

But, on that beautiful summer day, as I tried to stroll confidently into the crowd of neighbors and community organizers, the open lot became much more than just an old empty space for many people. Excitement was high as people gathered and curious drivers stopped by to see what was happening in their neighborhood. The grill was hot, the grapes cool, and the laughter refreshing as people met each other and took the opportunity to formulate ideas for naming and using this space. Stickers were going like hot cakes as people voted on suggestions, drummers were beating to the rhythm of the crowd, and children planted pumpkin seeds in little cups to take home—a token of what was begun that day.

After a while, it was time: the climax of the evening was about to begin! People were called to gather around and Petey Mitchell introduced the Peace Pole planting ceremony. Lisa Steiger said a few words about Summer of Peace events, Adrienne and Mark introduced themselves and their desire to see community growth on this lot along with the garden, and Ms. Bertha Givins (well-known around here as the Godmother of Peace) read a beautiful poem she had written about the life of a peace pole. Then Petey requested that the children come to the front and called on the elders of the community to remember that children are the future, and that they need to be loved and protected, and given a legacy to live for. Petey defined children as anyone 21 and younger, so I was part of the children group, and while I felt somewhat embarrassed to be included with the 5 and 6 year olds, I also felt honored to be included in the circle of wisdom and protection that the older generations provided. Then, without further ado, the Peace Pole was planted in the ground, right on the corner—its message loud for all passerby to see! Some people planted beautiful perennials around the Peace Pole, while others planted vegetables in a tilled area behind the Peace Pole, and then began the goodbyes as people took one last look at the suggestion board and waved both to newly acquired acquaintances as well as to old friends. 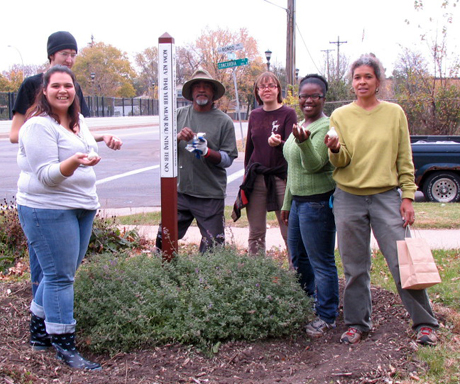 Now, three months later, if you drive by the corner on Concordia and Victoria, you will see the flowers blooming around the Peace Pole, and the pumpkins trying to overtake the tomatoes, peppers, and eggplants. Mark keeps the lawn mowed as several people are working to sift through all the ideas that the community members gave us. In an effort to serve as much of the community as possible, the area will hopefully contain largely self-maintaining plants of a small fruit tree orchard around benches for meditation or meeting space, perennial flowers, and edible landscaping. The community expressed strong desires for a calm, relaxing green space, as well as a beautiful area to stop and smell the flowers, or grab some fresh produce for dinner, and we have made efforts to include as much of those as possible.

We are fortunate that this space is on a very busy corner, and are hoping for high involvement and awareness by the neighbors so that they feel the desire to develop this area into a beautiful green space for the community. We will need the neighborhood to come together to build and maintain this garden, from building the benches to laying the paths, planting the trees and flowers, and spreading the good word! Please stop by Summit-U Planning Council’s office to find out how you can get involved, or feel free to stop by when you see someone else out in the garden! There is much yet we can do this fall to prepare for next year’s spring, so don’t be shy.

May Peace Be In Our Homes and Communities