The Vallejo Sister City Association has commissioned a 10-foot-tall; six-sided concrete monument or “Peace Pole” in recognition of the city’s several Sister City partnerships across the world. In coming months, the gift is expected to be presented to city officials, who will determine where the approximately 1,200-pound monument will rest.

Each side of the Peace Pole will commemorate a different city’s relationship with Vallejo, including Trondheim; Akashi, Japan (forged in 1968); LaSpezia, Italy (1986); Baguio City, Philippines (1993); Bagamoyo, Tanzania (1993) and Jincheon, South Korea (2009).

Mr. Larry Pinero is working with city officials on the monument’s home. Consideration of location is the park between the John F. Kennedy Library and the Santa Clara Street U.S. Post Office, as well as near the Ferry Building. 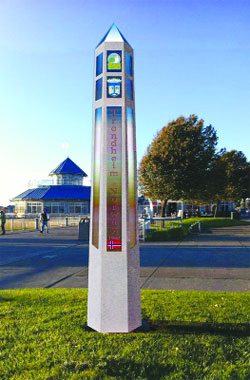 An artist's rendering shows the 'peace pole' in recognition of Vallejo's Sister City partnerships across the world. (Courtesy art)