On August 11th, 2010, on the eve of 19th Anniversary of Independence Day of Uzbekistan. Nahohisa Takayama,a member of The Goi Peace Foundation and The World Peace Prayer Society visited his long time friend Mr. Anatoli Iosonev at Samarkand State Museum in Samarkand, Uzbekistan. This is where Mr. Takayama present the World Peace Prayer and Flag Ceremony and planted a Peace Pole with Mr. Muhamad Boboroev, Chief director of the Museum and local students. 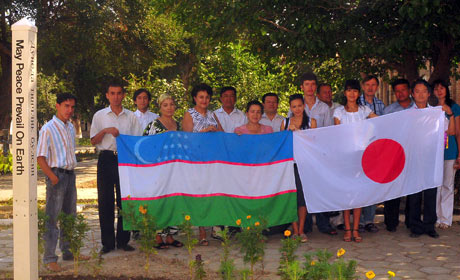 There were a Newspaper reporter and three TV channeland covered the whole event.
http://www.ut.uz/eng/tourism_and_travel/symbol_of_peace_arrives_in_the_ancient_city.mgr

The chief director, said “Peace begins within heart of each one of us. Wars of the other countries are not the matter of others, but it has deep connection to us. Not only to pray for peace of our country but also for other countries will lead our own peace in our country. Thank you for bringing the Peace Pole from Japan which is very far from Samark.”

May Peace Prevail on Earth