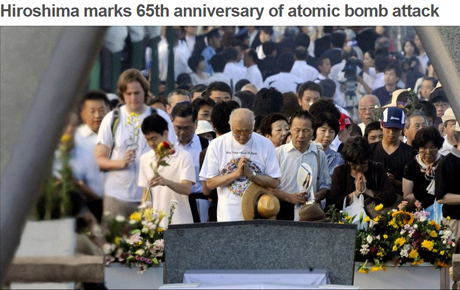 A moment of silence was observed throughout Japan, as the Peace Bell rang at precisely 8:15 a.m. This was the time when the atomic bomb was dropped on the city of Hiroshima.

For the first time in its 65 year history, the United States Embassy representative in Tokyo and United Nations Secretary General attended the memorial service. Also in attendance were Japanese government officials, foreign diplomats and families of the survivors.

It is a historical year for the people of Hiroshima and the world at large.

The BBC online news agency featured photographs from the Hiroshima Day observance and to our great joy we discovered a man wearing a May Peace Prevail On Earth T-Shirt. Seen here in this photograph!