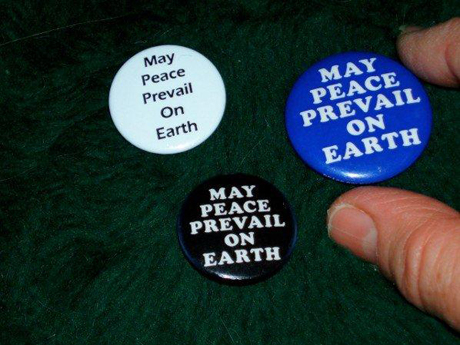 Handing out free “May Peace Prevail On Earth” peace buttons has been a project of Partnerships In Peace (PIP) since 1985 when Andrea started networking with peace groups around the world. She first found the 7/8” buttons at the Peace Pole Maker in Maple City, Michigan which she ordered in different colors. Eventually The World Peace Prayer Society offered them in larger sizes, but Andrea found people liked the smaller ones which combined easier with other jewelry or a necktie.
Over the years, Andrea collected many interesting stories about the fate of the peace buttons. Her research determined that cashiers were the most likely to ask for them. Andrea would be checking out of a grocery store, and the cashier would ask what the button said. After saying, “May Peace Prevail On Earth” Andrea would ask if they would like to wear it. Like passing the peace, Andrea would take her button off and pin it on the cashier. Amazingly, when Andrea would return days later, the cashier would still be wearing the peace button. She always told the cashier that when they gave their button away, they could call her (giving them a Peace in Partnership business card), and Andrea would give them another. This happened often, to the point that over the years Andrea handed out over a 1000 buttons!
The obvious places Andrea shared the peace buttons were at Earth Day events of the PIP Peace Center, at Peace Rallies, and at different peace events. Andrea was always pleased to find people still wearing them at other events, sharing stories of their own experiences of passing the peace. On any given day, she kept a supply in her bag to give away because someone was always asking about them.
The peace buttons also opened the door to talk about Peace Poles “May Peace Prevail on Earth” which Andrea planted around metro Atlanta. Many Peace Poles were planted because of receiving a peace button, like the day Andrea visited a Bahai’ Unity Church with Gail Lash, PhD, and met Jeff & Sarah Streiff. Jeff was a teacher at Briar Vista Montessori Elementary School in NE Atlanta, where Andrea’s son had attended years ago. Within a year of receiving his button, Jeff had coordinated a Peace Pole in front of the school. Andrea attended the dedication with a tear in her eye, remembering her many years of volunteering in her son’s school when Mr. Stevens was principal. It was like a full circle of cosmic energy for her. The peace button project continues in 2010 to great success. 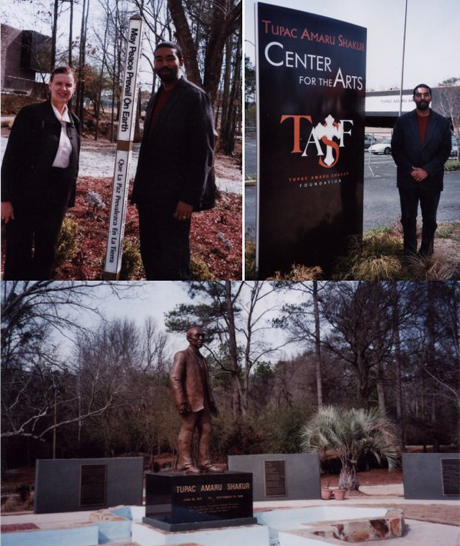 Vern Cambridge, Director of Tupac Center for the Arts, at the Peace Pole with Andrea Kay Smith in 2009, in Stone Mountain, Georgia.