The Respect & Understanding Consultative Meeting – African Region was held in Johannesburg, South Africa between June 11-13. Members of the Commonwealth Youth Programme joined representatives from 10 Commonwealth Africa Region member countries to discuss issues on Respect & Understanding with reference to young people in order to promote peace and tolerance within the African Region.

During the opening program, Bockarie Enssah, Peace Representative of The World Peace Prayer Society from Sierra Leone, presented a World Peace Flag Ceremony to honor the 21 Commonwealth African Flags. Each of the Commonwealth countries was blessed with a prayer for peace to prevail in their land and in the hears of their people.

…”The ceremony was warmly appreciated by all participants especially those who were lucky to carry the flags of their countries… I pronounced the names of the countries followed by the prayers. We closed the ceremony with a peace song which I taught them. After the ceremony the flags remained in the meeting hall serving as a reminder to all to generate energies for the promotion of Peace.”

May Peace be in Africa!
May Peace Prevail On Earth! 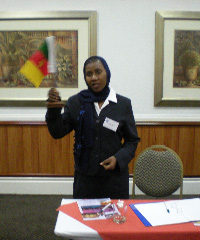 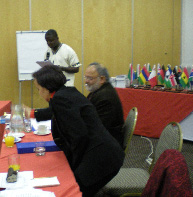