Promoting the oneness of humanity and the interconnectedness of all life
High Falls, New York 12440
Thursday, April 30, 2008
www.lifebridge.org

Ulster County Boces implements an educational weekend, annually. This is the first year it was hosted by Lifebridge Sanctuary. The Sanctuary’s Peace Pole proudly sits in front of the building surrounded by landscaping and benches for visitors to sit and enjoy the quietness. 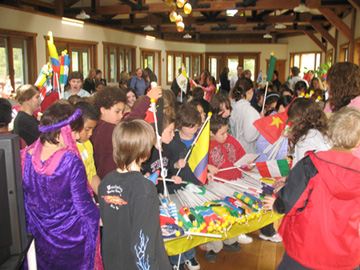 The World Peace Prayer Society was invited to perform the World Peace Flag Ceremony. Children rushed to gather their flags and eagerly sat back in their seats. Opening ceremony began with ringing of the bells and with the audience reciting, “May Peace Prevail On Earth.” 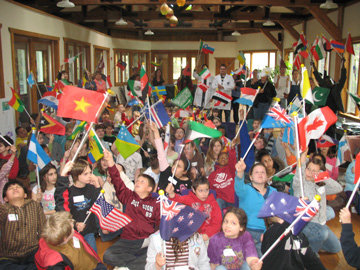 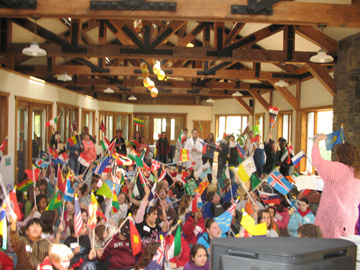 Upon completion of the ceremony, the Children’s Media Project presented a claymation video “Share your Peace” prepared by youth, ages 9 to 12, for the 2008 Peace Pals International Art Exhibition. It brought tears to the audiences’ eyes, as they watched the little group of Claymation figures march across the screen. In one scene, you saw a little sign held up by one of the figures that read, “May Peace Prevail On Earth.” As the film ended and faded to black again our message, May Peace Prevail On Earth was proudly displayed. Then came the thunderous applause from the audience.

From Spectator, Vanessa Witcher:
Every member of the room cohesively passed flags around to each other. The previously divided groups within the hall, unified into a sea of colorful flags. The children’s excited movements of the flags were like the waves on the sea itself. There was a feeling of magic as a hush settled over the room in eager anticipation. With each recitation of a country and “May Peace Prevail On Earth” you could feel the collective energy rise in the room spread through her contagious energy. Where as I had entered a room of strangers as an outsider, an observer, as I left there was an undeniable feeling of oneness, openness, friendly warmth and no divisions remained. I personally look forward to bringing this home to Saint Joseph’s with the ceremony this upcoming fall. And to make sure this great message is carried throughout the world. Thank you so much for allowing me to experience this great ceremony.