Second Annual World Peace Flag Ceremony and Concert for Peace to celebrate: A SEASON FOR NONVIOLENCE

Monica Willard, WPPS Peace Representative and longtime supporter, along with singer/songwriter Jackie Tice led this public event to celebrate the work of Mahatma Ghandi and Martin Luther King, Jr. in their own community.

The flags were distributed among the guests, who stood when their country name was called, raising the flag. At the end of the region, they processed to an altar with a desktop Peace Pole, where the flags were gathered.

The World Peace Prayer Ceremony concluded with flag bearers gathering around a little girl who held both the flag of the United States and that of her native Colombia. 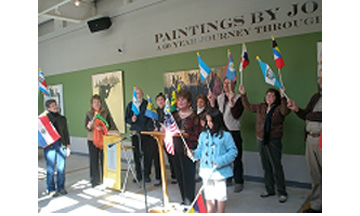 Report by Deborah Moldow, WPPS Representative to the United Nations.