There is a new addition to the Island of Kinmen, a small island off the coast of Taiwan. It is a Peace Pole which can be seen by the Island of Xiamen, PRC. A Peace Pole is symbolic in any geographical location, but has significant meaning amongst these post civil war torn Islands. 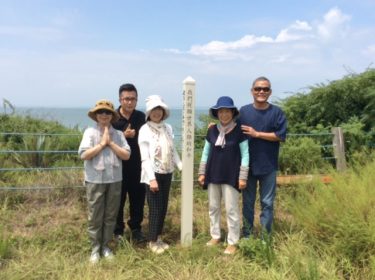 Kuniko, the planter of Peace Pole, and friends with Peace Pole on Kinmen Island

The Islands of Kinmen and Xiamen are making strides to come together to live harmoniously in Peace with one another.

On the Island of Kinmen which was heavily barricaded in 1949 against the incoming invasions.” There was a fierce battle caused by the gunfire of the Chinese People’s Liberation Army of the People’s Republic of China to Kimmonjim to invade the island” per Kuniko the planter of the Peace Pole.

Remnants of that battle can still be seen on Kinmen. Barricaded beaches and ports as well as structures strong enough to withstand the battle that lay ahead for those on the Island. Kuniko discusses “The building of that era which still remains now, after 50,000 shots a day, the shell is still alive.”

The significance is great and the message extremely powerful. May Peace Prevail between these Isles,  may both countries harmonize with each other.

Thank you to Kuniko for sharing this event and helping to spread the message of Peace.