Dodging raindrops, Elgin Rotary Club members dedicated a Peace Pole on May 23rd that now is part of the city’s Veterans Memorial Park along the Fox River. 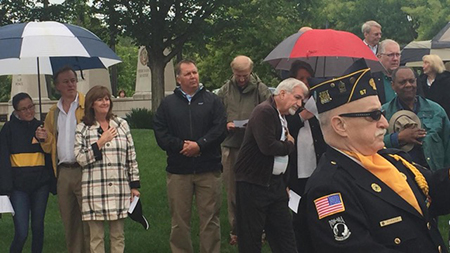 Mayor Dave Kaptain told the crowd the location was a fitting one, as those who served in the military “fought to bring peace to everyone.”

Alan Kirk, President of the Elgin Rotary Breakfast Club, said that the Rotarians had been looking to put up a Peace Pole for about 15 years, at the urging of club member Ben Henrikson. According to Kirk, the Rotary’s breakfast group has about 20 members, while a group that meets at noon has 65 members.

The Rotarians also donated money for creating Veterans Memorial Park, near Gail Borden Public Library, which was built in phases this decade. When Henrikson and other Rotarians approached the committee involved with the park project, they unanimously agreed to place a Peace Pole there, City Councilman Rich Dunne said.

Elgin’s Peace Pole was designed and built by retired dentist Greg Karr, who has been with the Elgin Rotary Breakfast Club since it chartered in 1989. 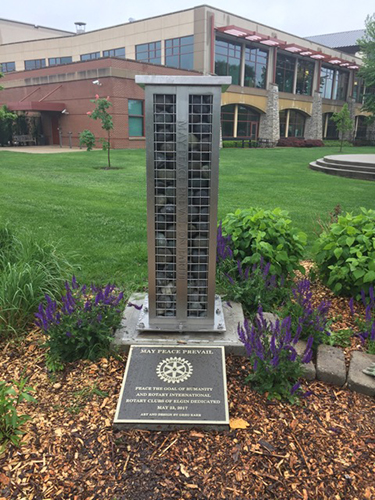 Prior to the dedication, Karr explained that the Peace Pole concept originated in 1955 with Masahisa Goi of Japan, who founded the World Peace Prayer Society. The first Peace Poles erected outside Japan went up in the 1980s, Karr said, and today there are more than 100,000 such poles up in about 180 countries, including one at the North Pole.

Each pole has the phrase, “May Peace Prevail On Earth” inscribed on it in a country’s primary language, Karr said. Karr’s pole also has that phrase written in braille and in Potawatomie on separate sides along with other symbols. 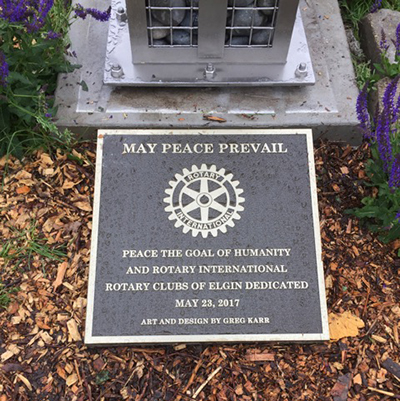 Karr said that while Peace Poles originally were made of wood, he decided to use steel and stone for his design. That design is a four-sided metal cage holding 196 stones, each etched with the code for each of the countries in existence on Earth, Karr said.

Karr said it took about 10 years, on and off, to create his piece, with part of the delay due to battling an illness. Karr’s friend David Reich, who is a welding instructor at Elgin Community College, was of great assistance in constructing the Peace Pole. 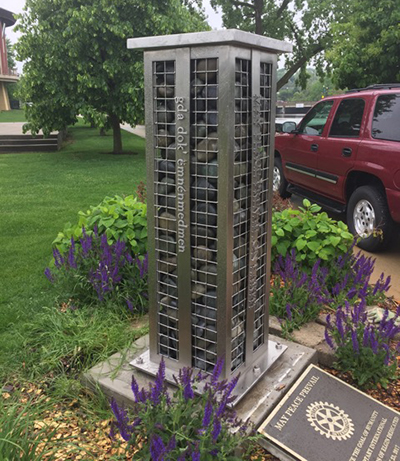 Karr said the most challenging part of the project, which he built in his garage, was finishing the stainless steel from the material used, which was raw from the mill.

The pole also was to have a spire on top of it that would represent the world’s seven continents, which didn’t quite work.

Putting his creation up in the park took about five hours Saturday and involved the help of several friends and family members, Karr said.

When speaking to those assembled for the dedication, Karr said, “This was a group effort, and it is a big part of my life.”