The World Peace Prayer Society (WPPS) and United Religions Initiative-Africa (URI-Africa) signed a partnership agreement to enhance the working partnership at the national, sub-regional and continental levels in Africa to promote a culture of peace.

The agreement was signed in San Francisco at the Global Support Office of the United Religions Initiative on March 28, 2017 by Ms. Fumi Johns Stewart, Executive Director of WPPS, and by Ambassador Mussie Hailu, Regional Director of URI-Africa, Representative of URI to the African Union and United Nations, and Global Envoy of URI. 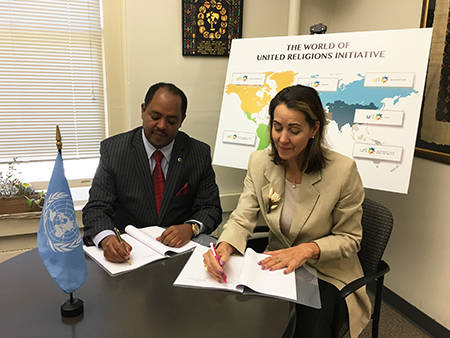 The objectives of the agreement are:

• To collaborate and maintain a close working partnership to promote a culture of peace and non-violence in the spirit of the universal peace prayer “May Peace Prevail on Earth”
• To organize world peace prayer ceremonies
• To plant peace poles in the spirit of peace building
• To commemorate UN Days through public events like the International Day of Peace on September 21st
• To support the principles, goals and programs of the United Nations (UN) and its agencies and to disseminate information and educational materials about the work of the UN on peace issues
• To work together for a sustainable peace with the participation of NGOs, individuals and intergovernmental organizations involved in educating and ending domestic violence, as well as with the corporate, faith and media sectors
• To promote a culture of peace, the teaching of the Golden Rule, and inter-religious and intercultural constructive dialogue, and to build trust and peaceful coexistence in Africa
• To organize workshops, meetings, and seminars, and to develop and implement peace projects jointly.

The partnership agreement sets out clear areas of engagement and a plan of action for the two organizations to work together.

On the occasion of the signing of the agreement, Executive Director of WPPS Fumi Johns Stewart said, “What a tremendous opportunity to ignite the spark of peace, tolerance and compassion in our hearts, to work toward a common goal in building a culture of peace beginning in Africa and rippling out to other continents of the world.”

On his part, Amb. Mussie Hailu said, “As a bridge-building interfaith organization, it is such a great pleasure for URI-Africa to foster this institutional working partnership with WPPS to promote a culture of peace and non-violence.  At this opportunity, I want to recognize the extraordinary work and contribution of WPPS since its establishment in 1954 in promoting the culture of peace through the spirit of the universal peace prayer of May Peace Prevail on Earth in the world.” 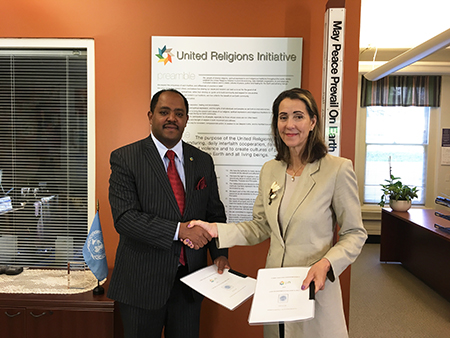 World Peace Prayer Society is a non-political, non-religious, international peace organization that works to share the message of “May Peace Prevail on Earth” through the Peace Pole Project, with over 140,000 Peace Poles planted around the globe.

URI-Africa is an interfaith organization which is working to promote enduring, daily interfaith cooperation, to end religiously motivated violence, and to create cultures of peace, justice, and healing for the Earth and all living beings. It has 200 member organizations in 32 African countries, with a regional office based in Nairobi, Kenya. There is a sub-regional office based in Uganda for Great Lakes Region Countries, in Nigeria for West African Countries, in South Africa for Southern African Countries, and in Djibouti for the Horn of Africa. 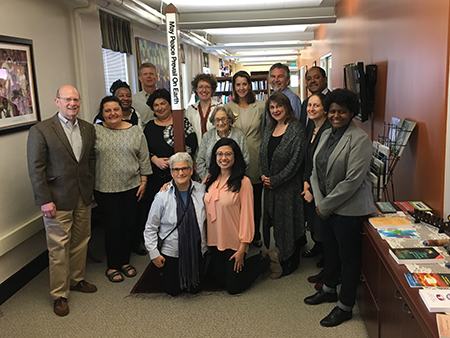 Both organizations have NGO Consultative Status with the Economic and Social Council of the United Nations.