The annual Vigil for Peace & Ecology, organized by retired U.N. staff member Rev. Susana Bastarrica, was held in Central Park on Sunday, September 18, 2016 and, as always, featured the message and prayer “May Peace Prevail on Earth” in various ways. The WPPS flags were present, along with a prominent banner across the front of the stage. 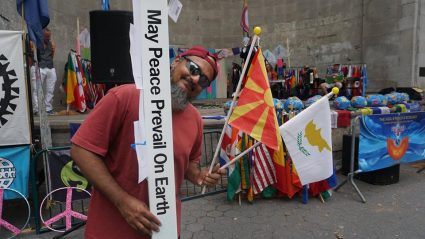 At 12 noon, Paul Sladkus of Good News Broadcast, directed participants to form a peace sign holding a selection of smaller flags and taking a Minute of Silence, followed by “May Peace Prevail on Earth!” 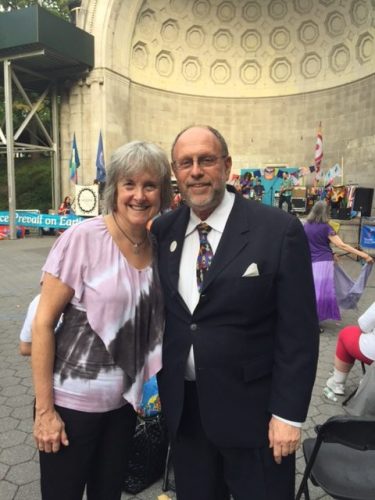 The lively day-long event included choirs, traditional Chinese, Mexican, and Korean dances, and a Japanese Butoh performance by WPPS Youth Representative to the United Nations, Brandon Perdomo.  Brandon and fellow dancer Allysa Oliver were in front of the stage, moving and dancing with 50lbs of sacks of rice each, accompanied by a live cellist and percussionist on stage. 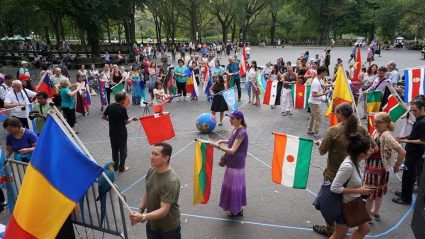 Toward the close of the day, the park guards asked the event to close down early, just as a Beatles tribute band was setting up. Miraculously, Rev. Deborah Moldow managed to secure one of the band’s microphones and have the large flags distributed among the crowd just in time to conduct a brief but heartfelt World Peace Prayer Ceremony! (Unfortunately, the band did not get to play.) 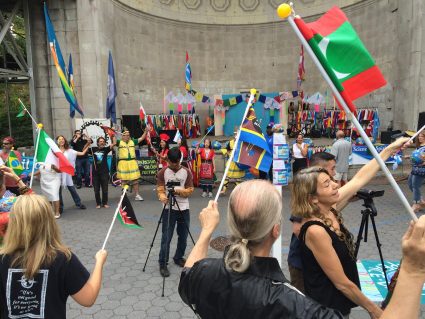