The intergovernmental Commission on the Status of Women (CSW) meets annually for two weeks at the United Nations headquarters in New York to promote gender equality and the empowerment of women. CWS59 opened on March 9, 2015, with Representatives of Member States, UN entities, and non-governmental organizations from all regions of the world attend the session and NGOs also busily engage in their own parallel events. The main focus of the 2015 session was a review of the Beijing Declaration and Platform for Action 20 years after its adoption at the Fourth World Conference on Women in 1995, as well as the empowerment of women in the post-2015 development agenda. 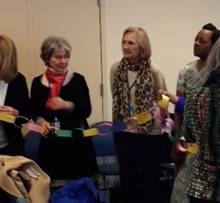 One of the very first events early Monday morning on March 9th was “Women’s Spiritual Empowerment: The Spirit of Beijing,” a spiritual launch of CSW59 held in the 8th floor Boss Room of the Church Center for the United Nations across from the UN. This event was jointly organized by SMVA Trust, FIFCJ/International Federation of Women in Legal Careers, United Religions Initiative, and The World Peace Prayer Society. 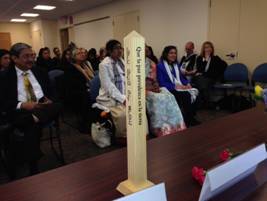 The room was filled with more than 75 people, who shared prayers and intentions to empower all the delegates and all of the millions of women and girls they represent. The prayers were formed into a colorful paper chain, and everyone placed their hands on the Peace Pole to add their energy to its prayer for peace.

Organizer Denise Scotto said, “Thanks so much to all of you who joined with us and created a very special energy to kick off the CSW!”