The World Peace Prayer Society is proud of our Peace Representative in Kenya, Mr. Juma Assiago, who serves as the Human Settlements Officer leading the Global Network on Safer Cities (GNSC) with UN-Habitat’s Safer Cities Program out of the UN Office at Nairobi.

While in New York for the UN Commission on the Status of Women, Juma found time to meet with WPPS Peace Rep Monica Willard, who represents the United Religions Initiative at the UN, and WPPS UN Representative Deborah Moldow. The three of them worked together in 1999 when Juma organized a Peace Pole dedication in downtown Nairobi as a monument to the victims of the U.S. Embassy bombing in August 1998. 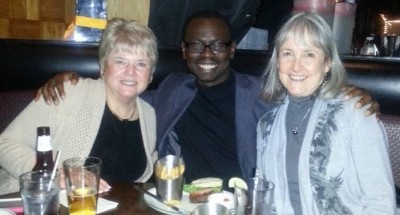 Recently, Juma worked with WPPS Peace Rep Mr. Mussie Hailu of Ethiopia, who is Africa Regional Coordinator for the United Religions Initiative, to have a new Peace Pole planted at the UN Office at Nairobi Garden of Remembrance to replace the Peace Pole that had been planted there in 2000. The new Peace Pole was installed on the 2013 International Day of Peace.